Lucy Watson, a vegan actress, model, and television personality, just challenged Olympic bronze medalist Tom Daley to a friendly vegan bake-off competition. On a mission to prove the legitimacy of vegan baking, the stakes were no less than that of the Great British Bake Off.

Watson promoted the competition via Instagram, posting a photo of herself and Daley post-challenge. Daley flashes a candid smile at the camera, sitting behind a full tray of what looks like muffins. Watson, on the other hand, looks somewhat coy, as her tray holds the mere remnants of a chocolate banana bread.

She captioned, “Vegan bake off with @tomdaley ?? I made a chocolate banana bread with @bulkpowders_uk protein powder (it all got eaten by the crew before I could take this pic ?) video coming soon.” The winner has yet to be revealed, but based on the crew’s appetite, one might guess that Watson reigned supreme. 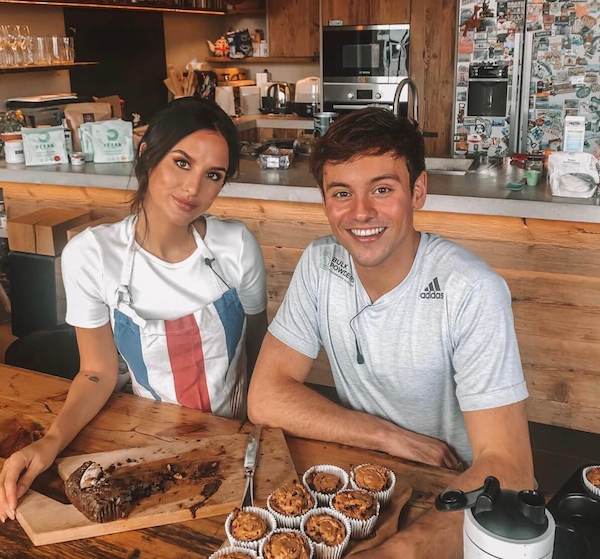 As Watson mentioned, the challenge was sponsored by Bulk Powders, a UK-based supplement company. Many of its products are whey and egg-based, but it does carry a line of vegan protein powder options, which was used in this challenge. Daley is also sponsored by the company, though he is not vegan and typically promotes the whey-based options.

Both Waston and Daley have written cookbooks, but their food philosophies differ in their approach to health. Watson’s “Feed Me Vegan” focuses on vegan versions of comfort food classics, such as cake, pizza, mac and cheese, pancakes, and more. Daley’s book, “Tom’s Daily Plan: Over 80 Recipes for a Happier, Healthier, You. All Day, Every Day.” also claims to take a health approach, but includes a variety of animal-based dishes like burgers and Tom’s Ultimate Bacon Butty. In this vegan baking challenge, Watson’s experience held the upper hand.

Daley isn’t used to losing. His competitive diving career is impressive, even though he’s only 24 years old. He’s won several Athlete of the Year awards by top British international athletic organizations in addition to multiple World Championships and two Olympic bronze medals. He’s no stranger to competition, but he may have just lost to vegan banana bread.