A successful vegan food service business, LUHV Foods, is set to open a vegan deli in the historic Reading Terminal Market, one of America’s largest and oldest public markets. Based in Philadelphia, the market has been in operation since 1893, housed in a National Historic Landmark Building. LUHV Foods is making history of its own by becoming the market’s first completely vegan deli.

LUHV Foods is a family-owned business, launched in 2015 by the Luccis, who originally immigrated from Argentina. The couple, Daniel and Silvia, already owned a restaurant in Newton, Pa., but when they were introduced to veganism, they slowly began to incorporate vegan options like black bean burgers onto the menu. As the vegan options grew in popularity among customers, the couple knew they were on to something.

Beyond their family restaurant, the Luccis began to sell their homemade veggie burgers and bean-based tuna salad to local stores and, eventually, major retailers such as Whole Foods. In 2016, the business received the People’s Choice Award at the Philadelphia Farm and Food Festival and were soon offered a cart at the prestigious Reading Terminal Market in 2017. 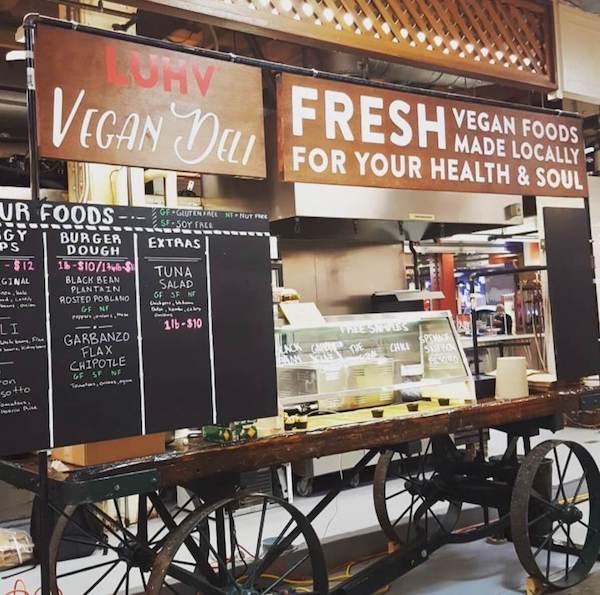 Following these past few months of successful business, LUHV Foods has been granted a permanent space within the market.

Facundo Lucci, the family’s eldest son, told Al Día News, “Any small business around the area is like, ‘Oh yeah I would love to be at Reading Terminal’… It just seems like a far away thing.”

The vegan deli is expected to open early August, serving up the company’s famous black bean burgers, along with other plant-based, health-promoting staples such as energy soups and vegan tuna salad, made with seaweed.

In addition to this new venture, the family still sells its black bean burgers in various markets and also runs a vegan bistro in Hatboro, Pa. The owners are committed to giving back to the community as well. In May, they received a $10,000 grant from Citizens Bank to launch a giving back initiative. LUHV, which stands for Lucci’s Healthy Vegan Food, will soon donate approximately 200 meals a month to a local Philadelphia soup kitchen or homeless shelter, feeding those who need the wholesome nutrition the most.