The UK retail giant Marks & Spencer have launched new vegan products: chocolate and caramel ice cream sticks and chocolate and vanilla cones. The launch follows the company’s efforts to expand its plant-based and “Made Without Dairy” options.

A post was shared on the Vegan UK Facebook group by member Ben McCann, who picked up a packet of the ice cream sticks during a shopping trip. McCann shared snaps of the package, individually-wrapped ice creams, and the ingredients to prove that the product is indeed vegan-friendly. The packaging even has a label stating the product is suitable for vegetarians and vegans. A report from Veggie Athletic confirmed the company’s introduction of the chocolate-lined vanilla cones.

Customers have raved about the new desserts over social media, praising the retail chain for its move and apt timing with the sweltering summer. 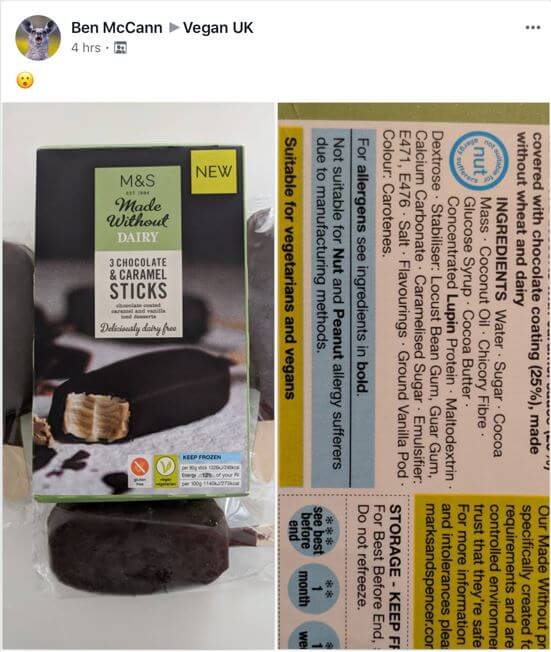 Marks & Spencer seems to be shifting its focus away from conventional animal products by expanding its vegan range. Last September in the lead-up to Christmas, the company’s holiday menu offered more vegetarian mains than meat courses. “The rise of the ‘vegievore’ and ‘flexitarian’ means that as a country we’re experimenting more with new vegetables and people are less afraid to try something different,” commented a spokesperson for the popular supermarket chain at the time. “Vegetarian and vegans shouldn’t feel like they are missing out – now veg can be the star of the show!”

Other UK companies are also making their own versions of dairy-free ice cream bars. Valsoia is a popular brand known for its gluten-free vanilla bars covered in chocolate, and Tesco has a full range of “Free-From” ice cream bars as well. UK residents can also grab ice cream from the nation’s first vegan ice cream van tour beginning in August, which is sponsored by the animal welfare non-profit, Viva.

Those in the US have their fair share of ice cream bars, from Daiya to Coconut Bliss and more, but a few companies are adding a bit more creativity to the classic frozen novelty. Dream Pops has created a plant-based “3D” ice cream popsicle made using fruit and superfoods, and they are now available at select Starbucks across Los Angeles.