Ben Williamson was just 7 years old when he won a school competition that landed him in the local newspaper promoting McDonald’s. Now Senior International Media Director at PETA Williamson has reflected on his young dalliance with McDonald’s in an article for Quartz.

Already a pescatarian when McDonald’s first opened a restaurant in Hampstead, North London, Williamson was offered the opportunity to cut the ribbon in front of ‘a phalanx of newspaper reporters and television crews.’ All he had to do was write a 12-word sentence better than his classmates starting with ‘I like McDonald’s because…’ Flouting the rules but clearly making a good impression, Williamson won with a 17-word sentence ‘I like McDonald’s because there’s a wide variety of food and my pal Ronald thinks so, too.’

‘The PR team took note that I was a pescatarian at the time, meaning that I ate fish but not other meat,’ recounts Williamson. ‘They delighted in serving me a Filet-O-Fish sandwich—on camera.’

Things changed for the now animal rights activist when he hit college, and studied philosophy and ethics. Jeremy Bentham, in particular, made an impact on Williamson who held the belief that ‘because animals have the capacity to suffer, they are entitled to the same fundamental rights that are afforded all sentient beings.’

As a result, Williamson decided to go vegan a choice he describes as ‘something easy that I could do that would be enormously beneficial to my health, the planet, and, most importantly, the animals.’ 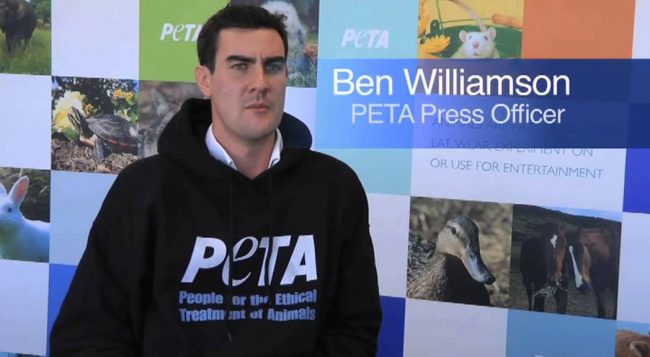 The moral of Williamson’s story is that it’s never too late to change your habits, even if you’ve been a ‘poster boy’ for McDonald’s you can still go vegan in later life. ‘We are constantly forming and reforming our ideas, which means that at any point, we can become someone completely different—someone better than who we once were,’ the PETA director encouraged.

‘If one consumer could break his shackles, do a 180-degree turn before the age of 30, and go from being a McDonald’s poster child to PETA’s senior international media director, other consumers can adapt, too.’