Canada’s first completely vegetarian campus cafeteria just celebrated its 15 year anniversary. Bridges Cafe, a student dining hall at McMaster University in Ontario, celebrated this milestone in partnership with Forward Food, a Humane Society International/Canada program that works to integrate vegan meal options into large and corporate institutions. During this Forward Food Gala, the university announced that it is expanding its vegan options and creating two new dining stations to cater to its plant-based and allergen-sensitive students.

The two new stations, Plantry and SMPL, resulted from the cafeteria’s collaboration with Forward Food. Plantry will differ from the other vegetarian stations, as it will only serve completely plant-based options (the other offerings occasionally include eggs and dairy products). SMPL will be an allergen-friendly station for students with certain food intolerances, and there will always be at least one vegan option at this particular station.

The Forward Food team worked with the cafeteria chefs to implement these two new stations and develop menus that would appeal to all students, not just the ones who identify as vegan. The chefs underwent a plant-based training course to sharpen their skills in vegan cuisine. The organization also held a Top Chef-style competition which challenged the chefs to create their best vegan dish from the training’s left-over ingredients. 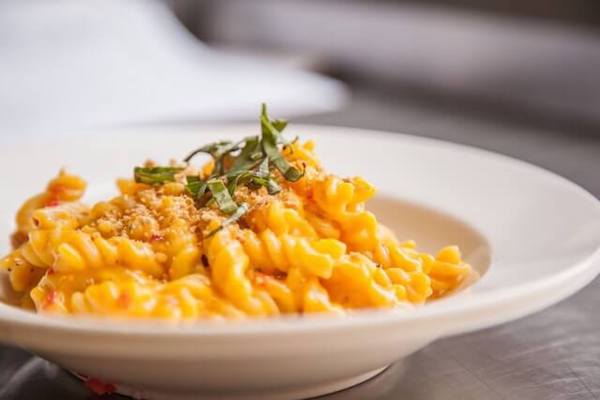 Menu options include a pasta and salad bar with numerous vegan and gluten-free options, vegan chili, hearty plant-based Buddha bowls, samosas, chickpea shawarma, and even a “Kalesadilla” stuffed with veggies, vegan chicken, and vegan cheese. This is definitely not the stereotypical college dining hall food.

These new vegan additions to the Bridges Cafe will open up the plant-based options for the 30,000 students attending McMaster University. According to  Forward Food, Food and Nutrition Manager, Julie MacInnes, there may be a similar shift in campus dining in other Canadian universities as a result of a revised Canada Food Guide. The guide is currently under review and is expected to reflect the mounting evidence that promotes plant-based foods for health, and many believe the updated version will include more fruit, vegetable, and plant-based protein recommendations.

In Ontario, change is already happening. Students at Queen’s University have also been exposed to more plant-based cuisine through Foward Food’s week-long student training program. The students learned about the nutritional benefits and abundance of the vegan diet while also learning how to prepare meals for themselves. That’s one college lesson they will certainly use later in life.