A new vegan restaurant just opened in the seaside UK town of Folkestone. Sister Seitan has evolved from a home kitchen business into its first brick-and-mortar location, and in just under three weeks of business, this new plant-based eatery is already attracting loyal omnivore customers.

Renata Brightman first dove into the world of seitan by experimenting in her home kitchen. She created variations of vegan meat using the wheat-based product, and started sharing with her friends and neighbors who “went crazy for it.” Brightman soon met Samantha Fairclough through a local Folkestone vegan event, and the two launched into the business together.

The pair have been working diligently to prepare for their new space since the beginning of 2018. Following several successful sold-out pop-up events, the two knew they were on the right path to establishing a permanent location. Brightman said in a press release, “Over the last six months Sister Seitan has worked very hard in and out of the kitchen and word has spread through social media, so the movement towards our own space has been a logical progression.”

Brightman also noted that many of their customers are not vegan. She said that many people have given her the same compliment: “I’m not vegan but that was a fantastic burger.” She also mentioned, “This Sunday just gone, a lady commented that she brought along her parents who reluctantly tried half a Seitan doner kebab, and as they enjoyed the flavor so much they ordered another one each.” 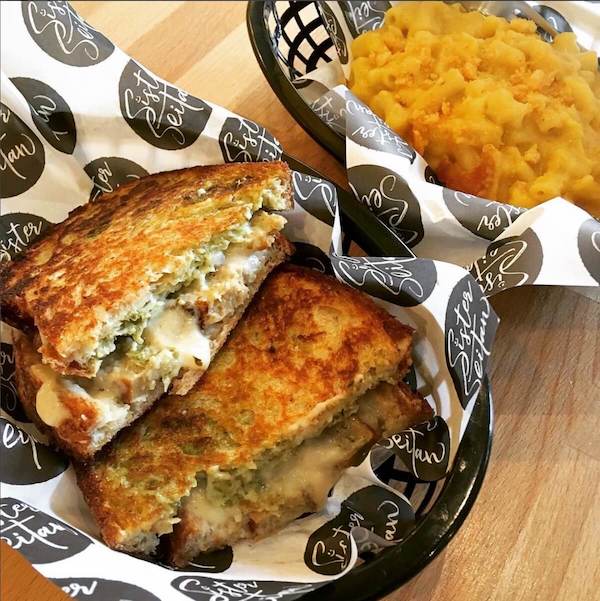 Sister Seitan is adamant about making (nearly) every ingredient from scratch. Along with the homemade seitan, Brightman said, “When you order a Sister Seitan burger, we have made the buns, the mayonnaise, the seitan, and the cheese sauce – we don’t have the space to currently grow our own lettuce, and cucumbers to pickle, nor to milk the soybeans, but hey, perhaps that’s a goal for the future.”

While many see London as the vegan hotspot in the UK, both Brightman and Fairclough claim that the Folkestone and greater Kent area is attracting more vegan interest. “The growth of the vegan food scene in Kent is inspiring,” Brightman said. She continued, “We were recently selling our burgers at the Kent Vegan Festival and were absolutely gobsmacked by the sheer amount of attendees, the diversity of ages, cultures, tastes and by the amount of stallholders offering vegan-friendly goods and services.”

Seitan, a protein-packed vegan meat alternative made with vital wheat gluten, is a popular choice among vegan meat producers. It is extremely versatile and can replicate several different types of meat based on its seasoning and preparation method. Further, it contains high amounts of protein (15 grams per 3 ounce serving) and very little fat (0.5 grams per 3 ounce serving).