A UK-based burger bar based known for its over-the-top burgers is taking customers by surprise with its latest creation: a “filthy” plant-based burger.

The Meat Counter, a popular burger joint in Falmouth, specializes in American-style comfort food like burgers, fries, and shakes. But last month, the company launched a vegan menu with options like a barbeque jackfruit sandwich, a falafel burger, and what the company has dubbed the “Hail Seitan.”

The Hail Seitan features a patty made from seitan, plant-based bacon, and vegan cheddar cheese with gherkins, onion, tomatoes, lettuce, and American-style mustard. (What is seitan? It’s a type of vegan meat made from vital wheat gluten, the main protein in wheat.) “I wanted to give vegans the same experience as meat eaters in the restaurant. I wanted to create a really filthy burger so vegans don’t feel restricted to making healthy choices,” co-owner and head chef Miles Barker told CornwallLive.

The development of a vegan burger that would appeal to customers was not taken lightly.“The Hail Seitan burger has been months in development,” Barker added. 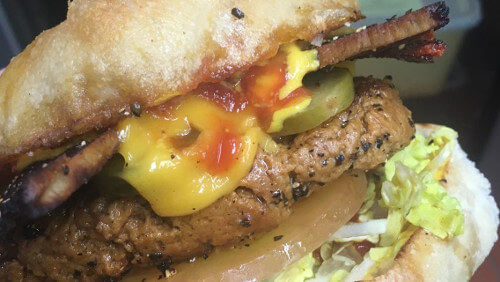 Since being added to the menu in late March, the vegan burger has become a hit with customers. “It [is[ the best vegetarian/vegan burger I’ve ever had and I’ve had a fair few now,” wrote one reviewer in a TripAdvisor review. “Wouldn’t expect such a great option from somewhere called Meat Counter but if you’re a carnivore looking for somewhere to take your veggie friend look no further!”

Another reviewer had high praise for the meat-heavy establishment’s new vegan options: “I had lunch here with 3 friends and we all decided to try their Hail Seitan [sic] and Jack-fruit burgers. They were so delicious and [it] was impossible to tell that it wasn’t meat.”

The decision to include vegan options on the menu likely comes a result of the rise of veganism in the UK and the growing concern that many have over the impact that animal agriculture has on the planet, our health, and animals. New data shows that the number of individuals who identify as vegan in the UK has grown by 700 percent over the past two years. Last year, lawmakers gathered in the Houses of Parliament to discuss how promoting veganism could effectively be leveraged in order to reduce greenhouse gas emissions.