Meghan Markle has been gifted a luxury vegan leather handbag in honor of her first birthday celebration as a member of the royal family, UK-based celebrity and human interest news source Hello! reports.

For Markle’s 37th birthday, international animal rights charity PETA (People for the Ethical Treatment of Animals) gifted the Duchess of Sussex a burgundy handbag with gold details made designed by sustainable, luxury vegan fashion brand Alexandra K. The bag is made from the brand’s vegan “Freedom-Leather,” a specialty fabric made from 100 percent silicone that requires less water, raw materials, and electricity to produce compared to other vegan leather varieties such as polyurethane and PVC. Additionally, the brand states that Freedom-Leather is recyclable and not toxic to the environment.

“This bag suits Meghan Markle’s fashion sensibility and animal-friendly attitudes to a T,” said PETA director Elisa Allen in a statement.“PETA hopes the gift will encourage the royal family and its fans alike to embrace compassionate brands like Alexandra K and to steer clear of cruelly obtained animal skins.” 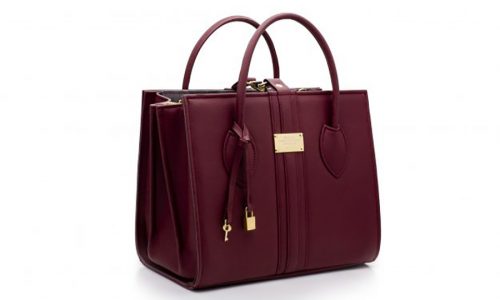 Though not vegan, Meghan Markle is an avid supporter of animal rights, an ethical stance that carries over to her fashion choices. Last April, a former commercial agent of Markle’s disclosed that the Duchess of Sussex “refuses” to promote fur and instead chooses to wear faux fur. Markle herself has gone on the record saying that she loves vegan leather trousers.

Additionally, Markle has a place in heart for mistreated animals. Her former agent noted that the 37-year-old duchess once refused to stay at a hotel that used a live, caged parrot as part of the decor. She also seems to have had a positive influence on her husband Prince Harry. Last December, it was revealed that Harry would not be partaking in the traditional Boxing Day Hunt. Many speculated that it is Meghan’s love for animals that prompted the prince to abandon his role in the cruel fox hunt.

Markle has also influenced Harry to reconsider what he eats. Last April, an anonymous source told the press that Markle was “weaning” Harry off meat in the months leading up to the royal wedding. The duchess herself has previously spoken about how she tries to eat vegan during the week. She shared her love of plant-based food in her royal wedding photo album, which featured artisanal vegan cheese made by Vromage.