Youssef Vromage didn’t start making vegan cheese to fill a gap in the vegan food industry. He didn’t do it for the environment or for the animals, and he didn’t do it for the money. He did it for love. Now an internationally renowned brand, Vromage vegan cheese has been included in the royal wedding album of Prince Harry and Meghan Markle. But how did a small vegan shop in a strip mall in Hollywood attract royal attention, and what’s love got to do with it? Youssef welcomed LIVEKINDLY into his shop to tell his story.

Vromage is definitely worthy of the “hidden gem” definition; although located on a traffic-jammed street in Hollywood, the tiny shop is tucked away in an inconspicuous shopping center among a takeaway pizza joint, a nail salon, and a vape and smoke shop. Foot traffic isn’t unheard of, but most customers seek it out (or send someone, in the way of the many celebrity clients). The small shop is occupied by a large refrigerator stocked with cheese, a (mostly empty) refrigerated pastry case, cashier counter, and hightop seating along the corner window, large enough to seat 2-4 people. One wall and countertop is plastered with newspaper and magazine clippings, all touting the brilliance of Youssef’s work. At the cash register, if not making cheese, one will find Youssef himself – welcoming, smiling, and ready with a sampling of his daily offerings. 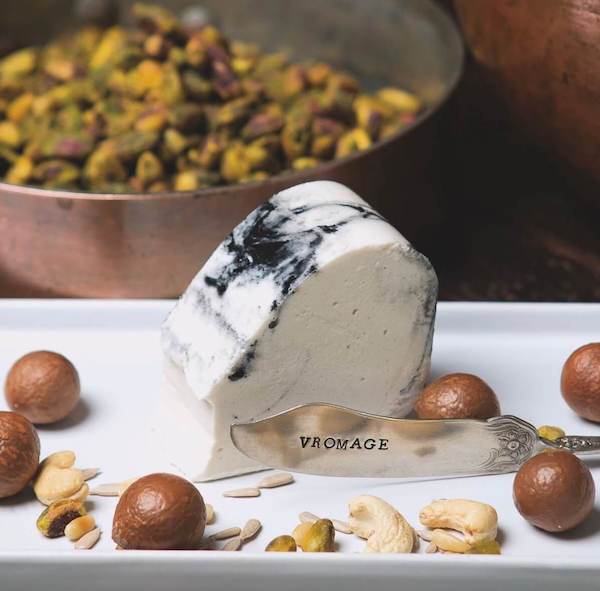 Youssef runs a one-man shop; he is the cheesemaker, cashier, and sandwich artist, but he’s developed a system that works. Built upon his decades of experience in the foodservice industry, Youssef has the culinary skills and business aptitude to succeed. He plunged into the culinary scene at the young age of 13, eager to create some distance from his 17 – yes, that’s correct – brothers and sisters. He moved from his home in Beirut to Casablanca and learned the tools of the fine dining culinary trade, eventually traveling through Europe and North America, working in restaurants wherever he went.

Following a twenty-year career operating four restaurants in Santa Barbara, Calif., and a break from the culinary world selling ancient art in New York, Youssef found himself in Los Angeles, once again feeling the pull of the kitchen. In 2009, he was introduced to a vegan chef, who offered him a sample of her homemade cashew cheese. “I spit it out, and I said ‘That’s not cheese! I’ll show you how to do cheese!’” he exclaimed, realizing that he was chasing something bigger than the need to prove a point – he was in love. In an attempt to woo his new acquaintance, he set out to create the most delicious plant-based cheese without the use of fillers, oils, starches, or added flavorings. Every time he refined his recipe, he offered her a taste, hoping to develop a deeper relationship as he developed his cheese.

Unfortunately, the romance didn’t last, but Youssef created a fairy tale ending for himself all the same. After opening Vromage in 2014, he has cultivated an impressive list of celebrity fans, including the Duchess of Sussex Meghan Markle. Prior to her marriage to Prince Harry, she lived in Los Angeles, where she discovered Youssef’s incredible plant-based cheese. Her affinity for the cheese stayed with her after moving to England, and she requested that the business be included in the royal wedding album. One day, Youssef said he received an email, asking to speak on the phone. Though he questioned the legitimacy of it, he decided to pursue the offer, and he’s glad he did. Youssef has a full page dedicated to his craft, alongside a glossy photograph of himself and his cheese, in the album which highlights all the things most cherished by the royal couple.

When asked if he had the honor of attending the wedding, Youssef remarked that he did not make the trip; “I’m busy making vegan cheese for everybody!” he said. 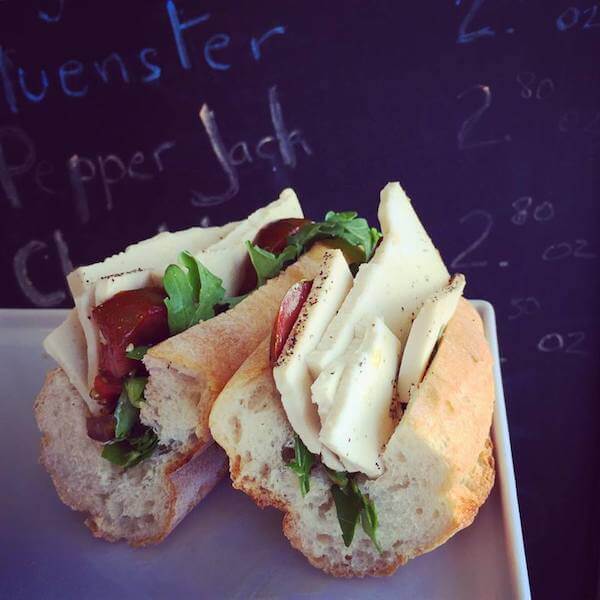 Beyond the royal couple, Vromage has attracted hoards of other A-list celebrities, including several members of the royal family from Saudi Arabia. Princess Jawaher Al Saud vacations in Beverly Hills each July and always frequents his shop during that time. He has also been asked to ship cheese to Abu Dhabi for a vegan restaurant backed by a Saudi prince. Closer to home, he listed off clients including Alicia Silverstone, James Cameron, Beau Bridges, Joaquin Phoenix, Danny DeVito, Al Pacino, and Ellen Degeneres. Of Bridges, Youssef said, “He’s crazy – he emptied my fridge,” and of Silverstone, “She’s always here.” Degeneres even ordered his mozzarella for a vegan pizza cooking segment she was planning with Food Network star, Giada De Laurentiis.

One of his latest products is the result of a request from Ryan Seacrest. The radio and television personality’s chef asked Youssef to create a vegan foie gras, and Ryan wrote back after trying the product, “I know foie gras and I know pâté and you are a genius.”

Many of these celebrity clients are not vegan, and when asked his opinion on the rise of plant-based products, Youssef replied, “It’s not a trend anymore. I can see the future is changing as long as we keep making delicious vegan cheese and vegan food. It has to taste, not just good, it has to taste delicious. For instance why people cannot leave cheese. Cheese is not good, it’s extremely good, so you have to make something as good or better in order for people to forget about the dairy.”

Unlike many vegan cheeses, including the small batch and gourmet varieties, Vromage cheese does not contain any soy, miso, starches, coconut oils, or nutritional yeast. He uses organic nuts and is meticulous about his ingredient sourcing. The herbs, truffles, and extra virgin olive oil are all organic and imported from the most reputable purveyors around the globe. Everything is made by hand – his, specifically – and he explains that every batch is just slightly different, depending on the nature of the nuts. “You have to monitor what you do,” Youssef explained, “You have to spend quality time.”

Youssef cranks out 20 varieties of vegan cheese, from Veganzola (gorgonzola) to Spicy Cheddar to Brie Truffle. “Everything sells,” he affirmed, but the Mozzarella, Ricotta, and the Pâté de Noix Gras are particularly popular.

Meeting Youssef and hearing him talk about his cheese, it becomes evident that he isn’t in it for the brush with celebrities, media attention, culinary acclaim, or even the money. He still does it for love, although his affections may have shifted.

“It’s all about the cheese,” he said. “I don’t do anything else. My life is cheese. I love what I do because I put a smile on people’s faces.”