Music icon, restaurateur, author, and animal activist, Moby, just tweeted out some praise for the vegan options at LAX International Airport. The unfiltered selfie features a casual, grinning Moby in front of the Real Food Daily storefront, with the caption, “Having vegan food at LAX is still amazing. Thank you @realfooddaily for making air travel less barbaric.”

Real Food Daily (RFD) is a well-established vegan micro-chain in Los Angeles. The restaurant has been serving plant-based meals to hungry Angelinos since 1993, with three locations throughout the greater Los Angeles area. Its full-service brick-and-mortar eateries traverse the city – one in downtown Pasadena on the East, and the other in West Hollywood. LAX welcomed RFD as its first dedicated plant-based eatery in late 2013. The outpost is located in the American Airlines Terminal 4.

Famished and weary plant-based travelers can find fresh and substantial vegan options at RFD, far beyond the typical airport fare of fast-food and convenience items. The menu is an abbreviated version of the restaurant’s full offerings and includes the some of the most popular breakfasts, sandwiches, soups, and bowls. Those rushing to catch a connecting flight can opt for the grab-and-go section, which features pre-made smoothies, juices, salads, and baked goods. 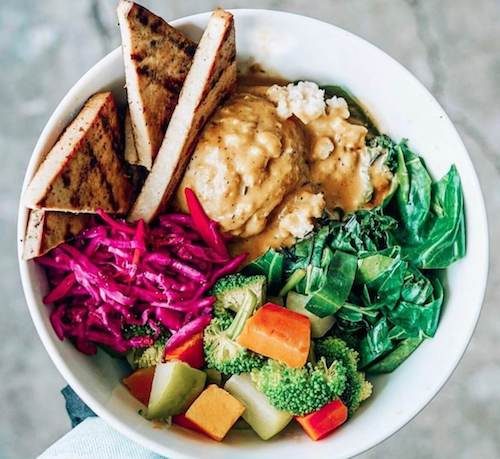 Passengers departing from other terminals can also find other vegan options at LAX. 800 Degrees Pizza and Fresh Brothers can create vegetable-packed pizza with vegan cheese. For meal-sized burritos and wraps, Blue Window has multiple options. Earth Bar and Nektar both offer smoothies, and acais bowls, and superfood snacks. Lucky Fish serves vegetable rolls and steamed veggie bowls. Lemonade features cafeteria-style soups and salads, all clearly marked with a vegan-friendly label. Point the Way Cafe, owned by Golden Road Brewing, has several vegan versions of its popular pub food, including giant pretzels, a banh mi sandwich, and a mile-high burger. There is always Starbucks, too, which offers an assortment of vegan-friendly oatmeal, fruit, bagels, and a veggie and grain protein bowl.

LAX has been ranked among the most vegan-friendly airports, according to Vegan.com. Other high-ranking international airports include San Francisco, Denver, Chicago O’Hare, Baltimore Washington, and PDX Portland.