Paris has given many gifts to the world. One of them is the opportunity for personal reflection in response to the introduction of new ideas. The Tomb of the Unknown Soldier has provided one of those opportunities.

A small remote cabin in Canada has a less obvious gift to the world.

One year ago, I acquired a small cabin in a remote location on the northern tip of Vancouver Island. As I keyed the door for the very first time, I turned to my friend Barnaby and said, “Well let’s see what I’ve bought, then.” A ski trip to the area four months prior had seeded a strong desire for an analog cabin. This desire overpowered the advice of others for site inspections and prior purchase due diligence, and the purchase was done over the phone after having only walked the perimeter of the cabin in snowshoes, and peeked through the sun-bleached curtains for a partial view inside.

I hadn’t expected much of value to me in the 450 square foot structure except for the structure itself, and I wasn’t disappointed. Memories and objects from the family-built cabin 27 years prior were not mine. The tired and dated carpet and furniture all impeded my quiet whitewashed Scandinavian vision for the cabin. As I explored further, I put a headlamp on and went down to the basement. The dirt floor was piled waist high with discarded building materials. I pushed myself further into the back of the dark space. Several truckloads to the dump would be needed here. Then, deep in the back corner of the dark room, I caught a glimpse of something different that stood out. Soggy feet and all, I pushed further in and saw moose antlers sitting atop the pile of garbage. Interesting. Why is it here? What is its story? Who was this moose? 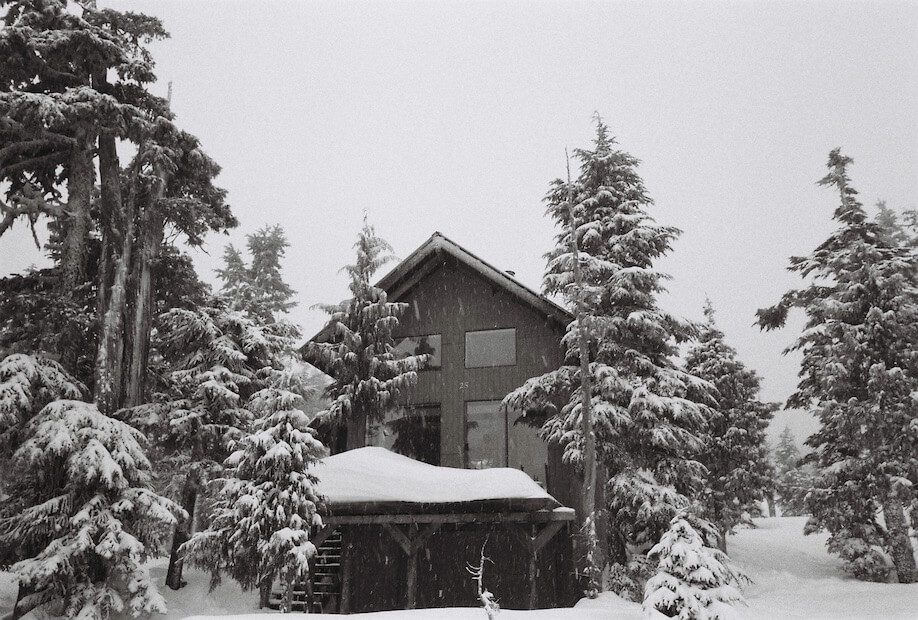 A few months later the cabin became hygge friendly. It had evolved into an analog cabin: candlelight only, a wood stove for heating, a propane stove for cooking. Sauna hats, a Polaroid camera, the Confession Game question cards, old cast iron pots and childhood family ski pictures made the cabin feel like home. With no cell coverage within an hour of the mountain, it had become an ideal environment to allow the mind to reflect on whatever it needed to reflect on.

Looking across the small finished room, there sat the moose antlers. The dump seemed a disrespectful place to take them. What should I do with them? What’s appropriate? How did the moose die and why? Did the moose have a family? I later learned that in the province of British Columbia alone 10,000 licenses to hunt moose are handed out annually. Was this moose on the receiving end of one of those licenses without its consent? Did this moose die a premature life in the name of sport-hunting or to feed a family of humans? I started to think of it as the Unknown Moose.

In this new cabin, the silence was powerful and I continued to reflect on my relationship with nature. I had given up eating meat a year earlier but my closet still contained leather shoes and clothing. So I decided to challenge myself to live without leather. I felt an attachment to many of these items in my closet and I wanted to see if I could break this attachment and change my behavior. I decided to honor the moose by challenging myself to take all the leather goods out of my closet for six months. I rested the antlers at the highest point inside the cabin as a reminder to myself of this commitment and in an appreciative memory of this unknown moose. I would review my attachment to the leather items in six months time.

I now have a pile of clothes and shoes on my floor at home that I am no longer attached to, in fact, I no longer want them in my home. They are no longer useful to me but they are still useful, and the current internal conversation in my head has switched from attachment to them, to what are the appropriate things to do with them.

The Tomb of the Unknown Soldier was established in the UK and France in 1920. It serves as a reminder of all the unknown dead that fell in the service of one’s country. Similar monuments have been built around the world since in over 50 Countries.

The Cabin of the Unknown Moose is a reminder to me of all the wild animals that have fallen prematurely at the hands of man. This particular moose has given me the gift of being a catalyst for changing my behavior and is an ongoing reminder to continue on the path of exploring my relationship with animals and nature.

What could be your catalyst to a more Beast-Free-living?

Scott Hawthorn is the Co-Founder and CEO of Native Shoes