Natalie Portman’s new film ‘Eating Animals’ had its World Premiere at the Telluride Film Festival. Natalie narrated and produced the documentary which was screened at the 44th festival in Colorado this weekend. Based on the New York Times bestselling book by Jonathan Safran Foer, who co-wrote the film with its Director Christopher Dillon Quinn, the documentary takes a graphic look at the realities of modern day factory farming and the methods used to mass produce cheap meat, dairy and eggs.

After reading the book, Natalie herself went vegan and has publicly spoken out about the benefits of her vegan lifestyle. After contacting the book’s author Natalie co-produced the film with director, Chris, who has worked on other powerful documentaries such as God Grew Tired Of Us and 21 Up America. The film received a standing ovation at its first ever screening at the festival, by what must’ve been a very moved audience.

The documentary uses graphic footage from inside food processing factories to expose not just the extensive animal cruelty, but the chemicals in the food produced and the alleged corporate environmental degradation. As the film points out, collecting this kind of footage is illegal and could result in a prison sentence for the individuals involved. But what about the truth of how our food is made and what really goes into it? That’s what the film explores. Director Chris told Deadline at the festival:

“It was a risk, and it’s weird to be called a ‘terrorist.’ It was a real eye-opener to actually see what farming was, which was people wanting to run from you, not wanting you to see they system that was in place, including these vertically integrated structures. They know deep in their core it is not right, but I actually think there is a lot of hope in that, the fact that they still know a guy with a camera shouldn’t be coming around here because it is wrong.” 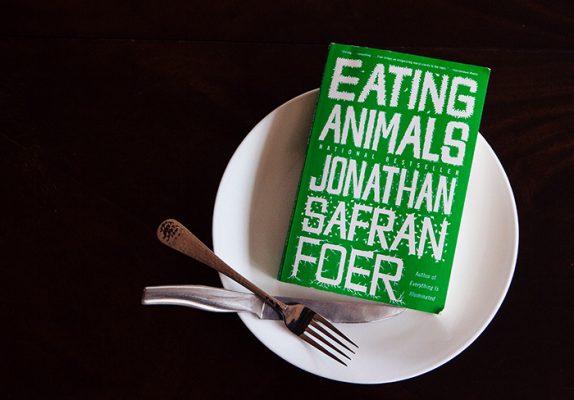 The film explores factory farming in a way that the book never could. As the author commented,

“I was kind of actually really thrilled about all the ways it departed from the book. It covered a lot of things I wish I had known about when I wrote it. Also a moving image can capture somebody’s heart in a way that is different, not better or worse, than the way that a book can. Just to be able to linger on a farmer’s face, and certainly the images inside farms, is incredibly persuasive but can also be challenging.”

The book is still well worth a read and the film, as harrowing as it is, is a must watch for anyone – particularly meat eaters. It’s about time we woke up to what’s really happening in the animal agriculture industry and this film gives a very graphic close up for us all to see.