The Irish Examiner reports that the broadcast will feature recordings the 92-year-old captured during one of his earliest natural history programmes, “Zoo Quest,” a show that followed the London Zoo’s efforts to capture animals from their natural environment, which first aired in 1954.

Attenborough captured music from local tribes, including funeral gongs and chanting, in his spare time while recording the show. The “Dynasties” narrator later passed the tapes along to the BBC Sound Archive for preservation.

“Sir David introduces some of his favourites he recorded on location, including some sparkling harp playing from Paraguay, the chanting of his team’s luggage-carriers in New Guinea, and the funeral gongs of the Dyak people in Borneo,” the BBC said in a statement. 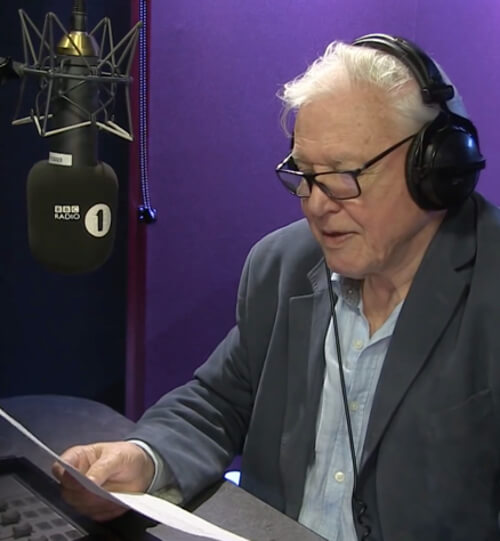 While Attenborough’s Music Planet will stray from his typical content, the naturalist is known for his love for the planet and animals. He calls for humans to respect the earth’s delicate ecosystems in the award-winning “Planet Earth” and “Blue Planet” series, both of which he narrated.

Although he has been criticised by some for not addressing animal agriculture’s damaging effects on the environment, he takes climate change seriously. The BBC reported that he deemed global warming “our greatest threat in thousands of years” when speaking at the opening ceremony of the UN-sponsored COP24 talks in Katowice, Poland.

“If we don’t take action, the collapse of our civilisations and the extinction of much of the natural world is on the horizon,” he said. “The world’s people have spoken. Their message is clear. Time is running out. They want you, the decision-makers, to act now.”

Attenborough’s upcoming Netflix series, “Our Planet,” will explore the human-driven causes of climate change, including deforestation and overfishing. The series is due to release in April.

Attenborough will take to the airwaves with Music Planet on BBC Radio 3 on December 28 at 11pm.