The Denmark-based vegan food brand Naturli’ has been making strides in the food industry recently by creating plant-based versions of popular animal products. From its strikingly realistic mince to bleeding burgers made of mushrooms, vegan meat aficionados had thought they’d seen it all from the modern company. The company has leaped out of the meat aisle and into the dairy case launching its own-brand of plant-based spreadable butter at Sainsbury’s and calling plants “the new black.”

“Some food simply isn’t the same without butter,” explains Naturli’s website. “That’s why we’ve come up with an alternative for all you non-dairy eaters. Melt it over hot sweet corn, use it for baking, in your pasta or for frying, butter your bread with it, and add it to sauces or vegetables.”

The plant-based butter is palm oil free, as the company aims to keep its ethical standards high. Unlike milk-based spreads, the butter is a “milk-free zone.” It’s made from almonds which are “rich in minerals and antioxidants and provides us with milk, marzipan, and butter.” And the other ingredients are shea butter for its “healthy fatty acids, antioxidants and Vitamins E and A, and adds a wonderful buttery texture and flavour.” Coconut and rapeseed, combined with carrot juice, natural aroma, and lemon juice complete the buttery combination of ingredients. 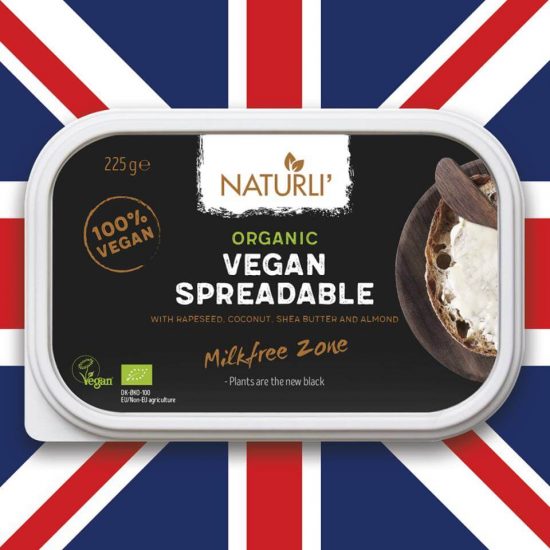 According to Naturli’s CEO Henrik Lund, who spoke out about his company in an interview with Just Food last month, the brand is taking plant-based food to the next level. At a glance, its products aren’t too different from what a traditional meat-eating consumer would expect to see, which Lund claims is a key part of making plant-based food mainstream.

“When we agreed with Dansk Supermarked that this product should not be on a niche shelf in the corner of their stores, that it should be placed in the meat counter, it totally changed the perspective [for the product] and also of the mainstream consumer,” Lund commented. “Plant-based is suddenly next to minced beef, chicken, lamb and it takes plant-based to a new level.”

Much like its new plant-based butter, which will be stocked at Sainbury’s, customers can pick up Naturli’s “bleeding” mushroom burger at the same supermarket. Its been heavily compared to the US vegan revolution-spearheading “bleeding” vegan meat brand Beyond Meat, as both the groundbreaking proteins challenge conventional meat sales. Naturli’s mushroom burger recently expanded overseas, as it is now offered abroad in supermarkets across the US.