With apologies to apple pie, nothing says American more than the hot dog. From concession stands to school cafeterias, hot dogs have become such a standard in the American society that they even have their own month (July), and the volume at which Americans are consuming them is staggering. During peak hot dog eating season from Memorial Day to Labor Day alone, 818 hot dogs are consumed every second, according to the National Hot Dog and Sausage Council.

Yet one group is hoping to end America’s dangerous tryst with the hot dog by pushing children’s hospitals to ditch hot dogs. (This follows its work to do the same in schools.) Meet the #HazardousHotDog campaign, launched by Physicians Committee for Responsible Medicine (PCRM) in 2017.

“Food-related illnesses are now the leading cause of death and disability in the United States, accounting for seven in every 10 deaths, and 86 percent of our annual health care spending,” says Neal Barnard, M.D., F.A.C.C., president of the PCRM and author of The Cheese Trap.

“Instead of being bystanders contributing to these statistics, hospitals have an opportunity to be leaders in the fight for health, and it can start with simple changes to patient and cafeteria menus.”

The link between hot dogs and cancer.

You would never feed a child a cigarette. Yet that’s exactly what hospitals – and parents, for that matter — are doing by giving kids hot dogs. One PCRM study, in fact, found that 72 of the 102 children’s hospitals surveyed serve hot dogs. Of course, if hot dogs aren’t on their menus, bacon, lunch meat, sausage or pepperoni probably are.

Here’s the biggest danger with hot dogs and other processed meats: In 2015, the World Health Organization declared processed meat, which includes hot dogs and the others listed above,“carcinogenic to humans” and predicts that 34,000 people die every year from eating processed meat. The American Institute for Cancer Research has also said there’s no amount of processed meat safe for consumption. “If there’s a clear link to cancer and no safe amount to consume, then the amount of processed meat served in a hospital – a place where people come to heal – should be zero,” Barnard says. Those hot dogs contain ingredients, by the way, that not only raise cancer risk but also heart disease risk, including nitrates, nitrites, heme iron, heterocyclic amines, saturated fat, cholesterol, salt and Trimethylamine N-oxide.

While hot dogs should be off your plate regardless of your age, it’s especially critical for kids. “It’s never too early to start eating a healthy diet, but recent studies show it’s even more important than people once thought,” Barnard says. One study, for instance, found that colon cancer incidence is on the rise in people aged 20 to 34 while another revealed that more young people are dying from this disease than ever before. 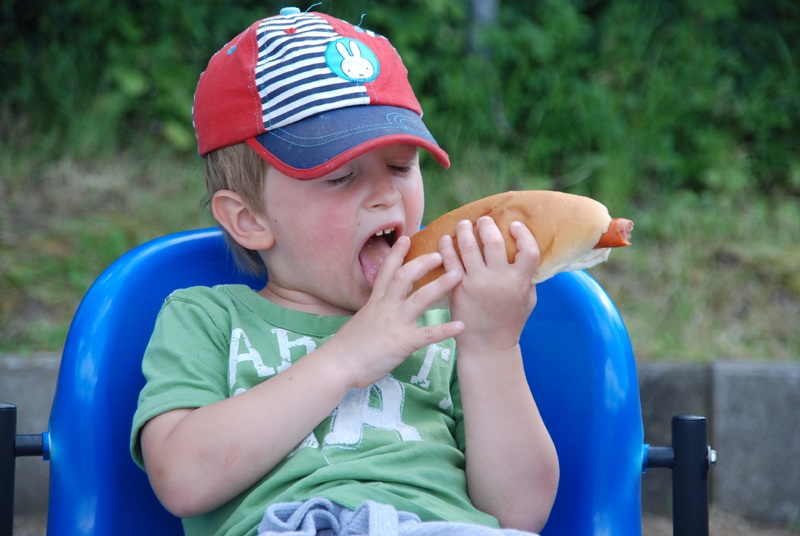 Of course, all of this raises the question of why hot dogs are so ubiquitous in American society to
begin with. Blame two factors, the obvious being tradition, Barnard says. The other? “The federal government, which encourages people to eat meat,” Barnard says. Programs like the Dietary Guidelines for Americans, National School Lunch Program and Farm Bill are all influenced by the meat industry, and checkoff programs are designed to help market meat.

Remember those “Beef. It’s What’s for Dinner” advertisements? Those were sponsored by the beef checkoff program, which uses government funds to promote beef. “If we can untangle the meat industry from federal food programs, we have a better chance of getting people to stop eating meat,” Barnard says.

Until that happens, PCRM wants children’s hospitals as well as schools to pull hot dogs from their menus. To encourage that change, PCRM has erected billboards and other advertisements in cities and states with some of the highest death rates from colorectal cancer. Ads posted near hospitals, for instance, show a young girl holding a hot dog with “Choking Risk Now, Cancer Risk Later?” splashed across the visual. PCRM also works behind the scenes to encourage hospital and K-12 food service teams to offer healthful menu options. In fact, a corporate liaison manager is currently guiding a pilot program with a medical center in California, and she connects with hospitals across the country to improve the nutritional quality of patient meals. PCRM has also launched plant-based pilot programs in several school districts and rewards food service directors who are doing exceptional work to provide and promote plant-based options with its cash-based Golden Carrot Award. PCRM also offers guide for schools, hospitals and health care providers.

So are the efforts paying off? Absolutely. “We’re seeing more hospitals starting to make the connection between the foods we eat and our health,” Barnard says. For instance, as a result of PCRM’s billboard campaign, the University of Mississippi Medical Center eliminated hot dogs from patient menus. Some hospitals are even ending their contracts with fast-food restaurants like McDonald’s, which are often housed on hospital grounds. And since The Active Learning Elementary School, a public schools in Queens, N.Y., made the switch to an all-vegetarian menu three years ago, it’s reporting increased energy levels, attendance and test scores among students.

Yet schools and children’s hospitals are just the start, as Barnard encourages everybody to ditch hot dogs. And don’t get fooled into thinking moderation is okay. “That only applies to good things, not things that cause cancer,” he says. “No one needs to eat cancer-causing foods in moderation, just like no one needs to smoke cigarettes in moderation.” Replace those hot dogs with veggie or carrot dogs. 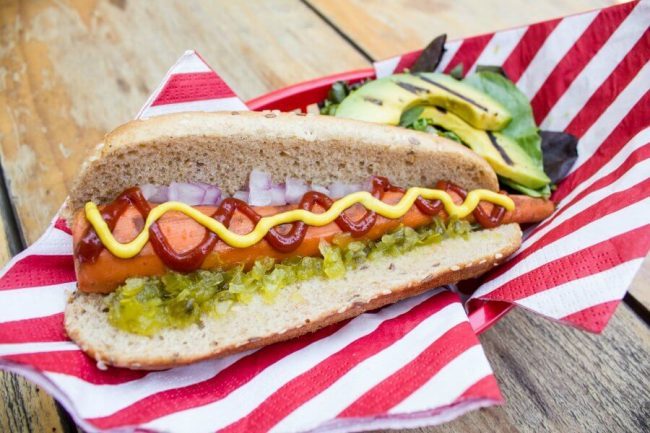 To aid PCRM’s efforts in making children’s hospitals hot dog-free, visit MakeHospitalsHealthy.org for resources you can pass along to local hospitals. You can also encourage your kids’ schools to go cold turkey on hot dogs.