New Jersey’s Freedom Farm Animal Rescue has secured a new permanent location for its animals. Due to support from a Go Fund Me campaign and Peace 4 Animals, the animal rescue has obtained forty-three acres of farmland in Cedarville, New Jersey. Prior to this, the four-year-old nonprofit was housing over two hundred rescued farm animals in a temporary location that had to be vacated by February 2018.

Freedom Farm Animal Rescue was founded by a former chef, Jamie Castano, who developed a deep empathy for animals in 2014. Castano told Markets Insider that after learning about ‘the horrors of the meat and dairy industry,’ and following one particularly eye-opening Thanksgiving turkey dinner, he knew he had to do something.

He wrote on the Go Fund Me page for the sanctuary, “I have and will continue to dedicate my entire life to animals in need of saving.” 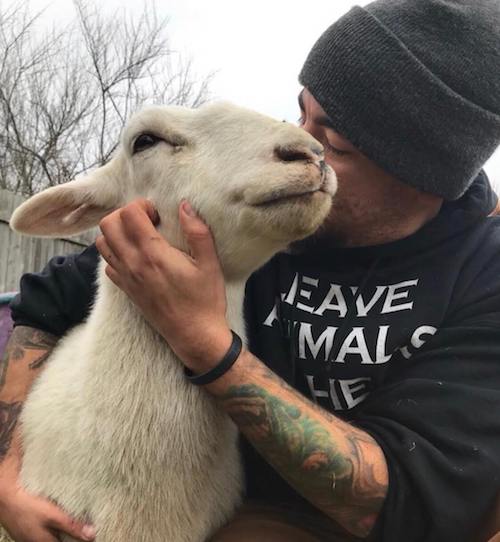 Castano’s animal sanctuary was first located on a farm in southern New Jersey, but due to ‘unfortunate circumstances,’ the organization was forced to relocate to a temporary location. With two months to find a new location, Castano knew he needed help. He created a Go Fund Me campaign and wrote, “Please understand, I never ask for help so this is difficult for me. I am swallowing my pride for the animals and our mission in general. The best thing for all of the animals would be to finally find Freedom Farm’s forever home and allow everyone to settle completely.”

Peace 4 Animals, an animal welfare organization founded by actress/model Katie Cleary, noticed Castano’s campaign via social media and came to the rescue’s aid. Cleary explained, “One look at Freedom Farm Animal Rescue’s viral video was all we needed to realize the sincerity and depth of Castano’s devotion to helping animals in need. We are thrilled to be associated with such a compassionate organization that shares our unwavering commitment to protecting the well-being of all animals while promoting a healthy plant-based lifestyle. Animals are our friends, not food!”

In honor of Peace 4 Animals’ support, Castano says he will dedicate a barn in its name. Construction is still underway on the new property. For updates or to donate to Freedom Farm Animal Rescue, visit its Facebook page.