German vegan documentary “The End of Meat” is making its U.S. premiere in New York City and Los Angeles.

At a time when more people than ever before are eschewing animal products in favor of vegan food, “The End of Meat” envisions a future where meat consumption is a thing of the past. Director Marc Pierschel, the man behind the 2013 vegan documentary “Live and Let Live,” embarks on an international journey in order to uncover what a post-meat world will mean for the future of the planet, animals, and humans.

In the film, Pierschel meets with pioneers of Germany’s vegan movement to learn how the meat-heavy nation launched more vegan products than any other in 2016.

“In Germany, home of bratwurst and schnitzel, meat is an integral part of the diet. That is, until a few years ago, when perceptions somewhat evolved. Health concerns and meat scandals led to a public debate about the ethical implications of meat consumption and the rise of plant-based diets,” reads the official website. “Meat producers launched their own vegan products; 100% vegan supermarkets opened; and almost every food manufacturer was adding and labeling vegan options. Is this the beginning of the end of meat? Are we approaching a turning point in the human-animal relationship?” 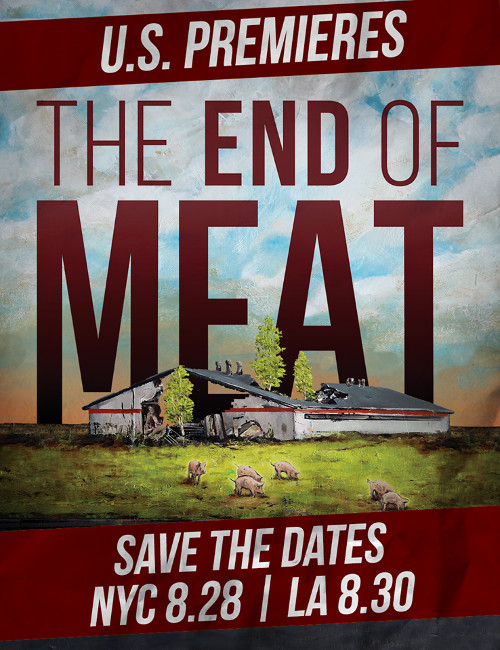 Throughout the film, Pierschel also visits Palitana, the first fully vegetarian city in India and a major pilgrimage site for followers of Jainism. Many Jains follow a vegetarian or vegan diet due to deeply-held principles of ahimsa, or non-violence. In addition, Pierschel has conversations with leaders in the rescued farm animal movement such as Gene Baur, founder of Farm Sanctuary, as well as Derek Walter and Steve Jenkins, “dads” to Esther the Wonder Pig and founders of the Happily Ever Esther Farm Sanctuary.

“The End of Meat” is set to make its NYC premiere on August 28 at Angelika Film Center. The LA premiere will follow on August 30 at Laemmle Music Hall. Those interested in securing a spot can follow the film’s official Facebook page for tickets or by visiting the NYC or LA event pages.

Image Credit: “The End of Meat”