By way of food trends, cauliflower is the new kale. The cruciferous vegetable has proved its applications far beyond basic steaming and roasting. Food manufacturers and chefs are using cauliflower as a healthy and unique alternative to a wide array of dishes, including pizza crust, mashed potatoes, hot wings, and rice. Now, consumers can bake with it as cauliflower-based brand Caulipower just launched Cauli-flour, a cauliflower-based flour that’s both vegan and gluten-free.

Cauli-flour, marketed as the “make whatever you want mix,” is a gluten-free flour alternative for both sweet and savory dishes. The company claims it can be substituted cup-for-cup for traditional white flour for any baked goods, including brownies, muffins, cake, breads, and cookies. This one-to-one ratio cuts down on the complicated and often hard-to-find ingredients needed for most gluten-free baking. 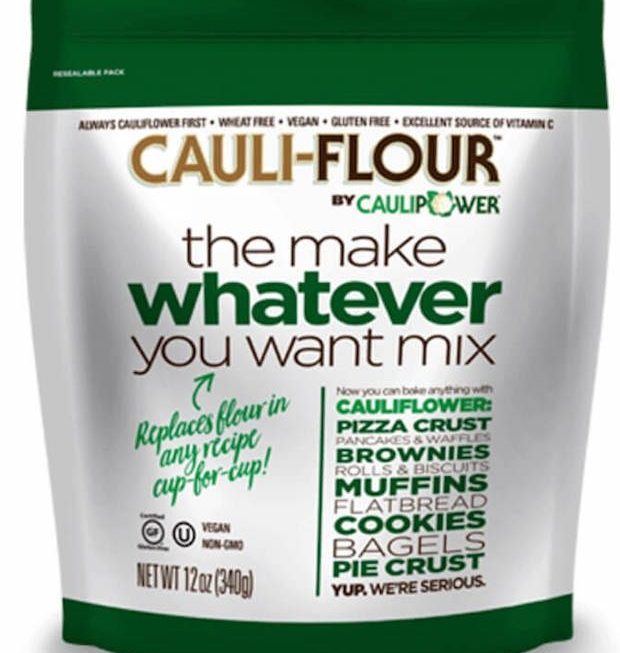 In celebration of the launch and the company’s one-year anniversary, Caulipower made an enormous birthday cake from its new Cauli-flour and sampled it to guests attending the Natural Products Expo in Anaheim, Calif., last weekend.

According to the company press release, special guest chefs were on site, cooking and sampling other dishes made with the new product. There have been rumors of brownies.

Caulipower made its first appearance as a company at Expo West last year, with its inaugural frozen cauliflower pizza crusts and pizzas. The Original Caul-flour is the first vegan product to join the line. Founder Gail Becker said in the press release, “In listening to [our customers’] needs, we heard their desire for ease and flexibility. That’s why when answering the call of ‘What’s next?’ we’re responding with, quite literally, the ability to ‘make whatever you want.’”  The mixes come in two options – Original and Paleo.

The mission of Caulipower is to allow people to enjoy the foods they love, no matter their dietary restrictions. The company strives to provide minimally-processed, nutrient-dense products accessible to the mass market. The Original vegan Cauli-flour is now available on Amazon, and the company says it has plans to expand to retailers in the future.