Jamie Oliver just announced via Twitter that his Italian restaurant chain, Jamie’s Italian, now has a dedicated vegetarian and vegan menu. These new plant-based options will be available in all Jamie’s Italians across the UK and overseas.

Oliver was inspired to create this new, veggie-centric menu by the National Vegetarian Week initiative. Sponsored by The Vegan Society, this week pulls together influencers and the public to promote the plant-based diet. Oliver is extremely active in the campaign, tweeting his support regularly leading up to – and during – the meat-free week. Further, the Jamie’s Italian restaurant page reads, “Jamie is passionate about how much good we can do for ourselves and the environment by cutting back the amount of meat we eat – so of course we wanted to support this brilliant initiative, too.”

Although the campaign only runs from May 14 – 20, Oliver’s new plant-based menu will be permanent. Dishes include tomato-based pastas with vegan parmesan, whole-roasted Sicilian-style cauliflower, superfood salads, and four kinds of pizza (request no cheese or veggie parm). 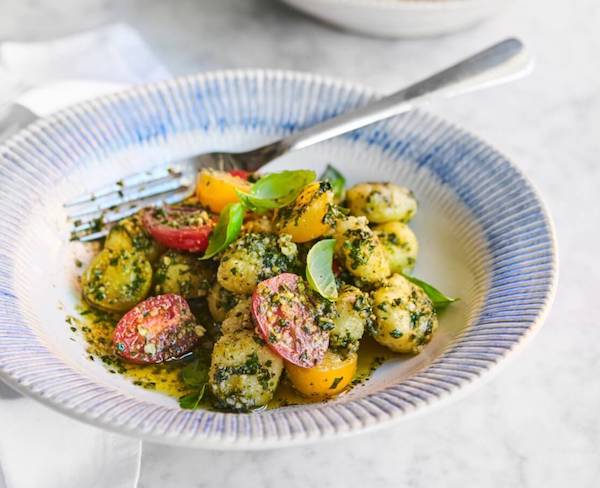 In addition to this new menu launch, Oliver has developed a five-day vegetarian challenge to further promote National Vegetarian Week. From May 14 – 20, participants who signed up online will receive daily email inspiration from the chef, including meat-free recipes, videos of encouragement, and tips on plant-based cooking. “With this challenge, I want to inspire everyone – veggies and meat-lovers alike – to embrace the wonderful world of veg, every day!” Oliver exclaimed.

Other food businesses in the UK have also lent their support for National Vegetarian Week. Doughnut Time, a London-based bakery, created a special vegan Baileys and Almande doughnut in celebration of the campaign. For a more high-end option, Essence Cuisine is hosting renowned vegan chef Mathew Kenney for an exclusive pop-up featuring some of Kenney’s most sought-after dishes. Finally, Foxlow, a beloved neighborhood eatery, has also developed a special vegetarian menu for its Balham, Clerkenwell, and Soho locations.

Similar plant-based initiatives are taking place both in and outside of the UK. In Australia, No Meat May is well underway. MooFree May is also taking place in the UK, asking participants to go one step further by eliminating dairy from their diets for 31 days.