Popular U.S. movie theater chain Alamo Drafthouse unveiled a vegan menu for its New York City location this week in response to “extremely high demand” from customers, the company said. The Brooklyn Alamo Drafthouse location opened in 2016, but despite the borough’s strong vegan food scene, it lacked the vegan options available at other locations.

Though small, Alamo Drafthouse theaters are well-known for enforcing strict policies against talking and texting during screenings as well as a system that allows theater-goers to order food and drink while the film is playing. 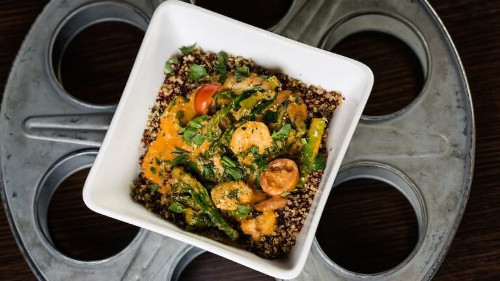 Alamo Drafthouse popcorn is vegan by default and the chain has consistently offered a variety of “accidentally vegan” options like Sour Patch Kids candy and soft pretzels with mustard (hold the cheese dip). Options for those looking to order a plant-based meal, however, have been limited. Plant-based options, like the vegan Beyond Burger, are at Alamo Drafthouse locations in Austin and a few other select locations across the nation, such as Denver, Colorado and Springfield, Missouri.

Alamo Drafthouse vegan options have previously been recognized by animal rights organization PETA, which ranked it among the five most vegan-friendly movie theater chains in the U.S. in 2016. The chain also serves a variety of vegan beer and wine. Though it is not marked on the menu, patrons of the theater can check an alcoholic beverage’s vegan-friendliness on Barnivore, a resource for beer, wine, and liquor made without animal products.