Big Fat Vegan Radio host, Honey LaBronx, The Vegan Drag Queen, will be performing at the event at PS Kitchen, along with special guest and fellow drag queen, Danity Diamond. Whilst there is a suggested entry fee of $20, a donation of any size is welcome.

Star of the show, Honey LaBronx, is a vegan, animal rights, and LGBTQ rights activist. Through her Youtube channel, The Vegan Drag Queen, and podcast, Big Fat Vegan Radio, LaBronx aims to inspire her audience with her cooking skills as well as with passionate discussion about key social justice issues

The show intends to raise money for The Vegan Living Program (VLP) and animal rights organization, Anonymous for the Voiceless. VLP is a vegan, month-long, mentorship program – it aims to educate people on why they should consider going vegan and how they can achieve the lifestyle change. The environmental impact of veganism is discussed in the program, as well as the ethical one, and nutritional meal planning is also taught to participants, who pledge to go vegan for the full length of the program. 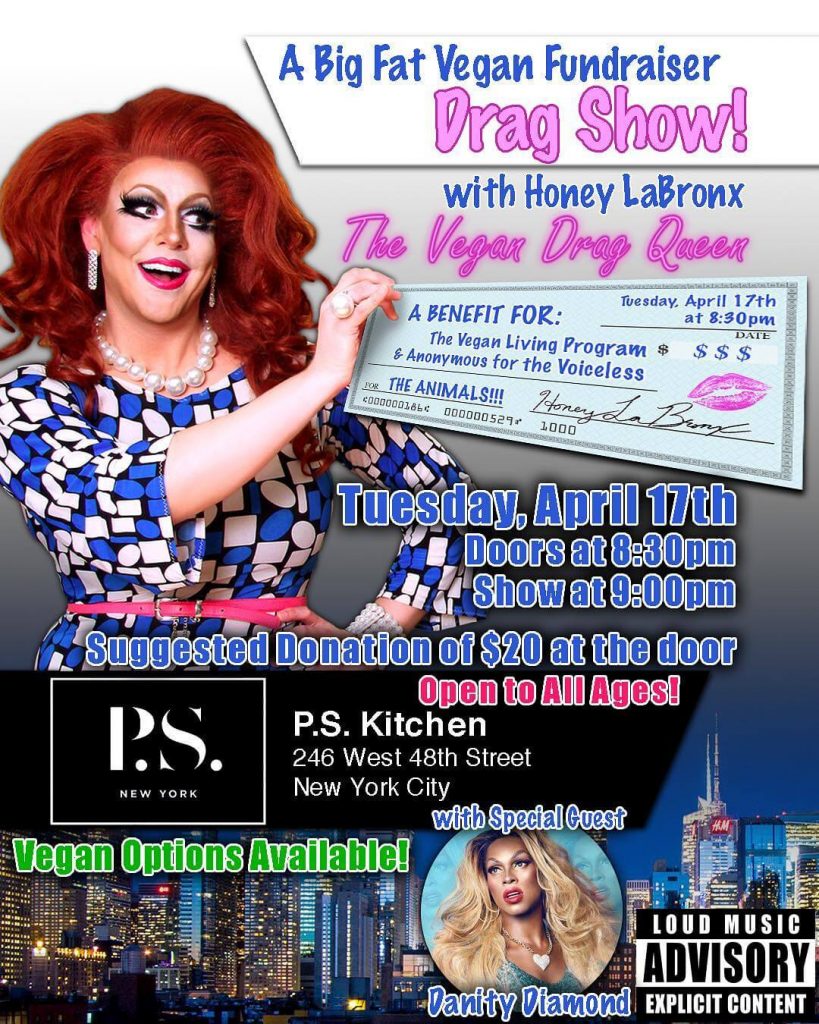 Animal rights organization, Anonymous for the Voiceless, which operates all over the world, focuses mainly on street activism to get its message across to the public. “We employ direct action with highly effective public outreach, using local standard-practice footage of what ‘food’ animals experience every second of every day,” the organization notes on its Facebook page. Through virtual reality technology and other resources, Anonymous for the Voiceless aim to “fully equip the public with everything they need in switching to a vegan lifestyle.”

The world is becoming more open to veganism, with the rise of vegan meat companies and developments in clean meat technology progressing rapidly. New York City is no exception, with the newly released vegan Beyond Sausage recently becoming available in the city. In March, it was announced that the first ever Black vegan festival is taking place in the city in August and in February, at New York Fashion Week, faux fur fashion and vegan eats were promoted.