Kokito’s Law is a direct response to the United Airlines incident that occurred last week, where a family’s French Bulldog, Kokito, was killed during the flight from Houston to New York. The United Airlines flight attendant insisted the family stow their puppy in the overhead bin. When the plane landed, the family discovered that Kokito had suffocated to death mid-flight.

The airline accepted full responsibility for the death and claims it is investigating to prevent future incidences. However, last year, United recorded the highest animal deaths out of all airline carriers with a total of eighteen deaths and thirteen injuries. 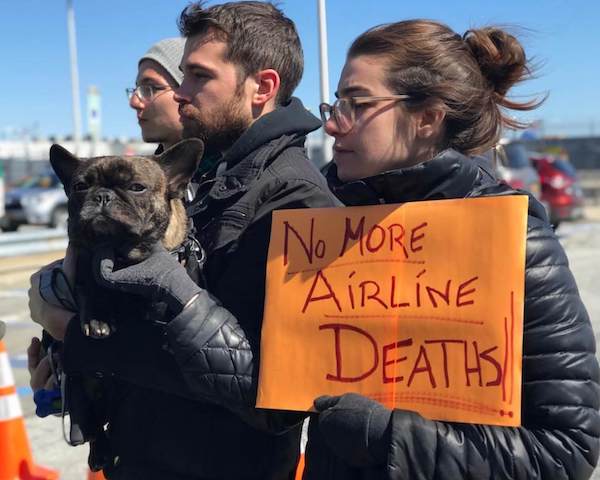 Senator Alcantara introduced this new bill to protect against these tragedies. At a press conference at LaGuardia Airport, she told the crowd, “Make no bones about it, United is in the doghouse.” The Senator informed the attendees that Kokito’s Law is on the way to the state senate.

If passed, the bill will prohibit placing animals in overhead storage bins and mandate all cargo areas to be pressurized, ventilated, and climate controlled. Flight staff would also be required to complete pet safety training. In essence, the bill includes basic safety measures to ensure equal safety precautions for both humans and animals.

Senator Alcantara issued a press release to confirm her stance. She wrote, “Animals clearly need a Passenger Bill of Rights, especially if they are going to fly on United. My dog is family and that Kokito was subjected to cruel and intolerable treatment that no living creature should be subjected to is horrifying. We will get to the bottom of what’s happening at this airline, and I hope the District Attorney opens a criminal investigation immediately.”

In 2018, local politicians are taking action to promote animal rights. In addition to this recent legislation, the San Francisco Board of Supervisors just passed a city-wide ban on fur sales, making history as the first major city to approve such a ban. The state of New York also has the chance to make history with Kokito’s Law if its elected leaders pass this bill.