The new vegan-only section was spotted by a member of the closed Facebook group “What Vegan Kiwis Eat” at the supermarket’s Glen Innes, Auckland location. Though small, it appears to stock a wide variety of plant-based products including dairy-free coffee creamer and yogurts, vegan cheese, and vegan meat.

It is unknown at this moment if other Pak N’ Save stores have set up vegan coolers; it can be speculated that the Glen Innes location is running a test in order to measure customer interest in plant-based food. The Kiwi supermarket chain, which boasts the nation’s lowest prices, has 57 locations across the country. 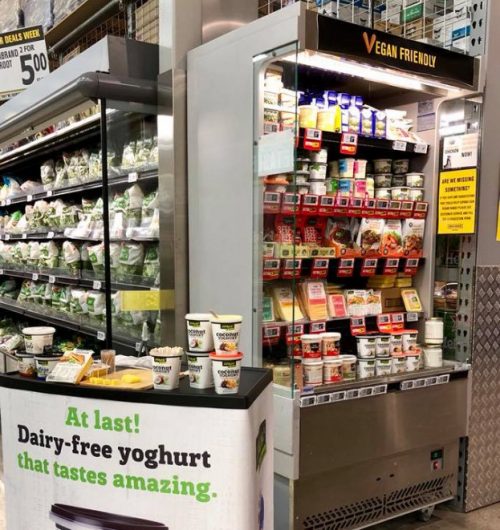 If the vegan coolers will become a fixture in all stores, it may serve as an example of how quickly mainstream retailers and consumers have taken up an interest in plant-based food. In December 2015, when asked by news site Stuff about the chances of launching a vegan section, the brand responded: “We do have a dedicated vegan section it’s called ‘Fresh Fruit and Vegetables’ and it is available in every store!”

Pak N’ Save isn’t the only supermarket to launch an exclusive case for plant-based groceries. UK-based supermarket chains Waitrose and Iceland each launched dedicated vegan sections this summer. For Waitrose, the announcement was shortly followed by a report that showed that sales of vegan and vegetarian food had increased by 34 percent in one year.

Change is happening in the US as well. Major retailer Target introduced vegan and cruelty-free products this summer as well. In regional supermarket chain Stop & Shop, vegan meat, cheese, and milk are all stocked in a separate section, albeit next to organic meat and dairy products. In the Vegan Trader Joe’s Facebook group, some customers have posted photos of dedicated vegan displays in Trader Joe’s stores, and the company regularly encourages stores to come up with their own freezer ideas.