Next Level Burger, a budding fast-food vegan chain, is expanding its hot dog offerings. All six US locations will trial the Beyond Sausage on July 4, in celebration of the grill-centered patriotic holiday.

In typical Next Level Burger fashion, this new menu item will be far from basic. The Kraut Dawg will be comprised of a Beyond Meat Beyond Sausage Brat Original, jalapenos, sauerkraut, and picked red cabbage nestled in between a fluffy gluten-free hot dog bun. The company claimed that the special menu item is only available “until we run out” on July 4, but the Beyond Sausage may become permanent shortly after this trial run, according to a company representative.

In a press release, CEO and Co-Founder Matt de Gruyter said, “Next Level Burger is jazzed to celebrate this year’s Independence Day with the debut of the Kraut Dawg, NLB’s take on the evolution of the backyard brat – featuring the game-changing Beyond Sausage from Beyond Meat. Cheers to liberty and justice for all!” 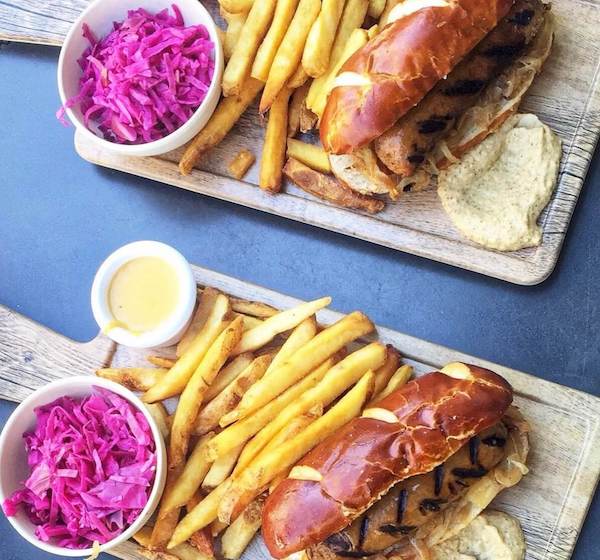 The chain currently offers two vegan hot dogs of its own creation, the Next Level Dog and the Chili Chz Dog, but like several other vegan concepts, it has chosen to partner with Beyond Meat to cater to its customer demands. The plant-based meat company has gained a cult-like following around the world, and its founder, Ethan Brown, has even admitted that demand has outpaced production. Beyond products do not act as direct competition to house-made vegan meats, they simply give consumers more choice. Some people prefer veggie-and-grain-based burgers and carrot dogs, whereas others crave that “bleeding burger” and sizzling sausage.

Another quickly growing vegan burger chain, Lord of the Fries, has also partnered with Beyond Meat. In April, the restaurant became the first to carry the Beyond Burger in Australia, and also included the burger on its New Zealand menu as well. Although the franchise still creates its own veggie burgers, it found that the addition of the Beyond Burger helped to pull in customers, particularly those who identify as flexitarian.

Since its debut in February, the Beyond Sausage has become widely available throughout the US, both in dining establishments and grocery stores. Vegan chains, like Veggie Grill, to omnivore joints like Bareburger and Yankee stadium, all carry the sausage, putting their own twists on the plant-based dog that sizzles, tastes, and smells like the animal-based original.