The 2018 Bull City Vegan Challenge is underway in Durham, North Carolina. For the entire month of April, ten restaurants in the city will compete to be crowned as the city’s best venue for vegan dining options.

The participating, meat-centric, restaurants include Dos Perros, Grub, Unscripted, Counting House, Juju, and M Kokko, amongst others. The restaurants will be judged in three categories: Best Overall Entrée, Best Appetizer, and Best Use of Theme. The theme for 2018’s challenge is “sustainability.”

Durham’s restaurants will each offer specific dishes for the vegan challenge which customers can order, and then vote on the best when the ballot becomes available later in the month. Customers who sample the vegan dishes are also encouraged to share snaps and thoughts on social media with #bullcityvegan in the caption – all those who post with the hashtag will be entered into a prize draw! 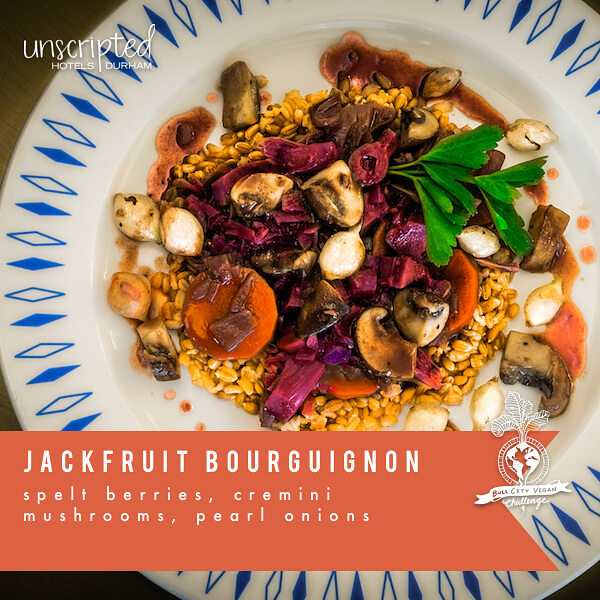 Crispy Silken Tofu and  Korean Rice Cakes are on the menu at Asian tapas bar, Juju, and Unscripted will be offering customers Jackfruit Bourguignon, Sweet Potato and Mushroom Cocotte, with Passionfruit Crème Brulee, made with oat milk, for dessert.

Many restaurants around the world are upping their vegan options, with some even swapping to vegan menus completely. New York-based restaurant consulting firm, Veganizer, recently stated that out of 22 restaurants it had helped switch to a vegan menu – 17 had reported an increase in sales.

California restaurant, Nick’s Kitchen, credit the switch as saving the business completely.  “We were just going to close down. Instead, we switched to plant-based,” co-owner Reina Montenegro told Forbes. “It was a leap of faith business-wide. But we exploded when we switched, from making only $200 a day to $2,000 a day.”