Hummus & Pita Co., a New York City-based fast-casual chain that specializes in contemporary Mediterranean cuisine like falafel, hummus, and shawarma, is reinventing the classic milkshake with the latest addition to its menu, a vegan hummus milkshake. Judging by customer reactions, the bizarre-sounding dessert may be one of the best smoothies in New York City.

Called the “Hummus Shake,” the new dessert is a vegan milkshake made from whole food ingredients like chickpeas, tahini, frozen bananas, dates, almond milk, and a pinch of cinnamon and vanilla. Customers can order the new vegan chickpea dessert in five flavors: Chocolate, Vanilla, Strawberry, Butter Pecan, and Pistachio.

Founder Dave Pesso told Business Insider that he had been curious to see if he could create a hummus-based drink that tastes like a milkshake. He worked on developing the recipe for a year, tweaking and perfecting the ingredients to make something that would intrigue and delight customers. “We like to think out of the box,”  he said. 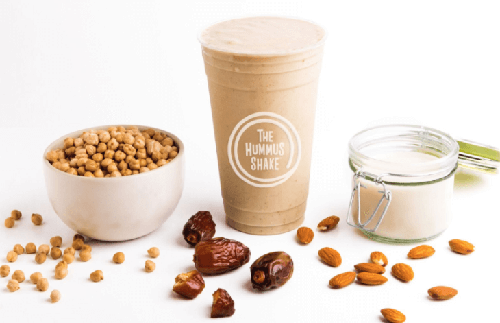 According to Pesso, who described the Hummus Shake as “OMFG delicious,” the creamy vegan dessert is a hit with customers, who can’t believe that something based on chickpeas could taste like ice cream. “They think they’re being punked. It is unbelievably tasty. Honestly, you’ll never have another milkshake again — that’s how good it is,” he said.

This isn’t the first vegan chickpea dessert to make a splash at Hummus & Pita Co. Last year, the vegan-friendly New York City restaurant debuted three dessert hummus flavors in Cake Batter, Chocolate, and Cookie Dough. Both the Cake Batter and Chocolate flavors are vegan. Not alone in its quest to produce healthier vegan desserts, other companies have gotten on board with creating sweet treats from beans. Earlier this year, the brand Delighted by Hummus debuted its Dessert Hummus in grocery stores across the nation. Rule Breaker, a Brooklyn-based vegan company, also makes desserts from chickpeas in flavors like Birthday Cake and Brownie.

While Hummus and Pita Co. is not completely vegan, it offers a variety of vegan options at its three establishments in NYC. Earlier this year, Pesso told Eater New York that he plans to open a total of 100 franchised locations by the end of the year.