But why is that? Is it the younger generations’ use of social media helping to inspire them to make the change? Would many 70 year olds care to follow in Kyle Jenner’s footsteps with a dietary change? And should we be annoyed at older generations?

Simon Amstell’s Carnage comically depicts the shame of older generations who are coming to terms with their past eating habits, attending therapy sessions where they attempt to utter the names of their old favourite dairy-cheeses.

This show illustrates changes in attitudes throughout history, and Amstell apltly narrates the questions, “[w]ho were we? How could we? Why did we?”

Perhaps the most significant factor is habit; older generations have grown up with minimal exposure to a viable alternative to eating animal products. 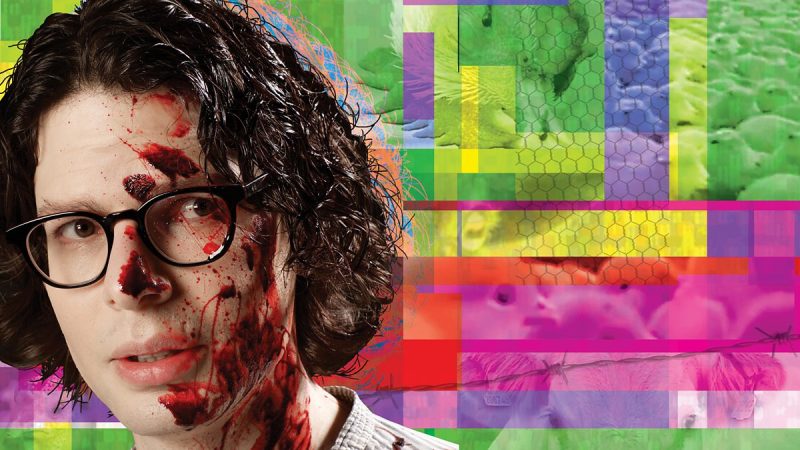 When in 1944 veganism was officially ‘established’ with the Vegan Society, a war was occurring – which meant rationing of meat and dairy. While this was a great time for consumption of (non-rationed) vegetables, when the world saw peace the public were excited to be consuming quantities of meat once again after 14 years of rationing.

Meat was seen as both a treat and entertainment. In 1956 Fanny Cradock ‘performed’… carving a dead pig to an audience at the UK’s Royal Albert Hall. Cradock went on for the next two decades to promote meat consumption and depict it in the most socially glamorous light.

Then, in the 70s and 80s, the disconnect in furthered: meat was increasingly sold so as not to actually look like it came from an animal. Fish fingers provided an answer to children not keen to eat something with a face, and pop-corn chicken at KFC made it sound like you weren’t even eating an animal at all.

With fast-food giants on the rise and advertising very cleverly orchestrated, people were drawn to the endearing clown in McDonald’s ads and the noble Burger ‘King’ and these visual facades hid the reality behind the food being advertised.

The power of advertising was colossal, and did wonders to shadow the truth and hypocrisy of our actions: when Oscar-winning film ‘Babe’ (a film about a loveable pig who escapes death on a farm) was out in cinemas, McDonalds advertised ‘Babe’ ‘Happy Meals’, giving away stuffed pig toys along with real pigs – except the real pigs were dead, in their burgers.

Then came the rise of chefs like Jamie Oliver promoting ‘healthy’ meat.

When eventually a vegetarian was heard on mainstream media, it was Gillian McKeith – whose method of making people healthier was to humiliate people and blame them for eating the things that advertising had been telling them that they should eat.

In Carnage, it is said that all meat-eaters are victims: as children we are fed meat at school meals, then meat for dinner when we get home from school, and this cycle appears normal and natural. Now we know that cheese is addictive, and that habits can be very hard to break. Research in 2016 by Duke University scientists suggests that habit leaves a lasting mark on specific circuits in the brain “priming us to feed our cravings.”

The film notes that “it is very cruel for youngsters today to ask, why is it that these people did what they did. we couldn’t have known that we were active participants in a slave-trade because the language at the time suggested that we were just eating our dinner.”

So maybe we should have some sympathy – understanding at least – for our elders. Rather than glaring at them and telling them they’re contributing to a blood-bath when they’re eating their turkey in front of you at Christmas, show them how great your food is with a smile. Train their tastebuds to love the plant-based life.

Endeavour to educate them and show them the vegan way, but don’t judge. Like us all, they are products of their upbringing.

Veganism is all about compassion, and this applies to our elders too.