Don’t swing over to Olly Murs’s Instagram Stories if you’re hungry. The English singer-songwriter and actor has been loading up his Stories recently with vegan food and drink, and a whole bunch of vegan ice cream that will have your mouth watering.

In a recent Story, Murs is waving around what looks to be a vegan Pret pot from the Pret a Manger UK spinoff restaurant chain Veggie Pret. Murs appears quite happy about the fact that the food he’s got is nondairy, squealing about it as he walks down the street.

In another Story, Murs quickly and reluctantly downs a charcoal wellness juice shot in one big gulp–he’s visibly fearful at first, but after downing it he says the taste is “all right, actually.”

Another Story shows a cooler full of assorted vegan ice cream pints from Booja-Booja, which Murs raves about and calls “unreal.” 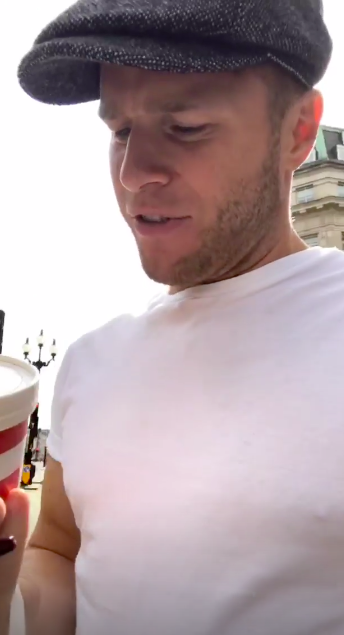 Murs isn’t the only celeb excited about vegan food. Rapper Will.i.am has been rather outspoken about his recent shift to a vegan diet and the health benefits as a result. Filmmaker Kevin Smith, who’s lost fifty pounds on a vegan diet after a nearly fatal heart attack, has praised the food at Crossroads Kitchen in LA and what seems to be his favorite go-to spot, the vegan fast-food chain Veggie Grill.

Vegan food also frequently overlaps with wellness trends like the popular charcoal, which has been touted for its benefits to absorb and pull toxins out of the body. Murs’s charcoal shot along with all the dairy-free food may indicate that he’s the latest celeb to adopt a vegan diet for weight loss or as a temporary detox cleanse. Beyonce famously challenged her fans earlier this year to join her on a 44-day vegan diet ahead of her Coachella performance. The singer, who gave birth to twins Rumi and Sir last year, said she was up to 218 pounds by the time she gave birth and that a vegan diet helped her lose the weight.

Meghan Markle, now the Duchess of Sussex, and Prince Harry, also ate a predominantly vegan diet ahead of the Royal Wedding to keep their energy levels up and weight down.