A new campaign in Paris, France is challenging the negative connotations about rats in a bid to swerve the poisoning of the species around the city.

A €1.7 million “anti-rat plan” was introduced in January in an attempt to reduce rat populations. Since July, 4,950 operations have been completed, with 200 parks and 600 buildings being treated to eliminate the rodents.

In response to these efforts, animal rights organisation Paris Animaux Zoopolis launched a campaign to inspire Parisians to accept the animals and “co-habitate intelligently” and peacefully with them.

Posters that read “Rats are not our enemies!” were installed around the city’s public transport systems, along with photographs of sweet-looking rats and information about the species. The posters point out that humans share many traits with the animals, such as intelligence, playfulness, and affection. They can also experience emotions, suffering, and show social behaviours. Additionally, one poster affirms that rats have a conscience, a statement backed by Cambridge research. Most notably, the posters remind the public that rats “want to live.”

Writing about the initiative online, Paris Animaux Zoopolis says its posters challenge common misconceptions about rodents including cleanliness, health risks, and aggression. Speaking about the negative view of rats, the animal rights organisation places the blame, in part, on the “sensational” writing of the Parisian press, that oftentimes demonises the animals and advertises “totally unfounded health arguments.” 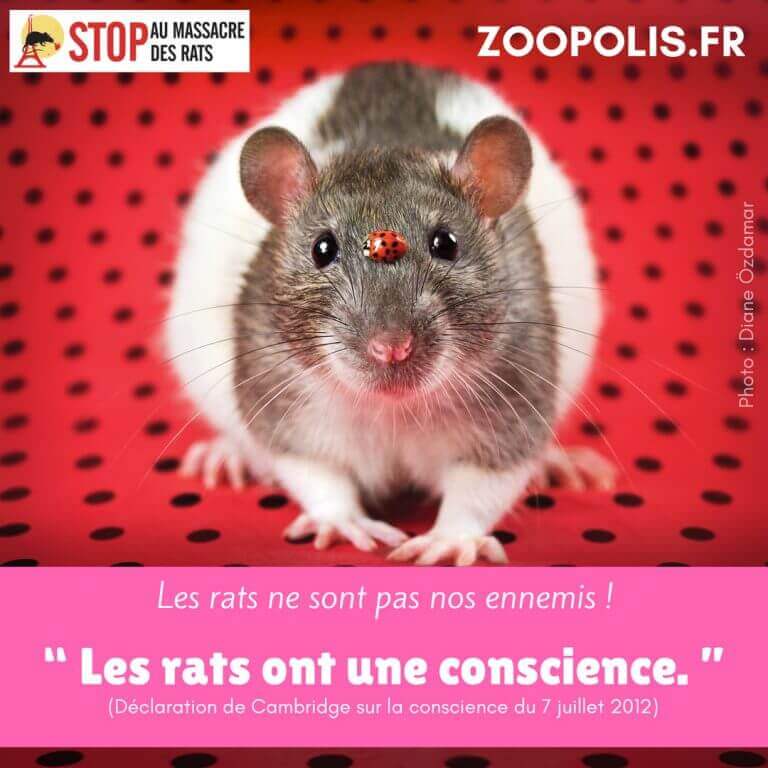 In April, Parisian police announced “that it is necessary, in the interests of the hygiene and the public health, to carry out a massive and widespread destruction of rats.” However, according to Paris Animaux Zoopolis, the anti-rat efforts are more about appearances; the Paris City Council claims that the health risk posed is “minimal” but the presence of rats “causes visual discomfort, fear, even phobia.”

Paris Animaux Zoopolis acknowledges some concerns surrounding the prevalance of rats in the city, such as droppings left and the tendency of rats to chew electrical wires that are mistaken for roots. However, the organisation maintained, “It is up to human beings to protect their facilities and take the necessary safety measures. Deratization is not the answer.” The group suggested measures that could be implemented, such as hermetic boxes and metal ducts to protect electrical wiring.

Paris Animaux Zoopolis explained that industrialisation has destroyed rats’ natural habitats, driving them to move to the parks and gardens of cities. The group said, “We must learn to live with animals. Animals are as legitimate as we are in the city.”