A new video featuring climate scientists has explored the link between diet and environment. “About 25% of all the global climate change problems we’re seeing can be attributed back to the food”, explains postdoctoral researcher Maya Almaraz. This number is significant, considering it is greater than all of the world’s transport combined.

The researchers analyzed how much carbon pollution is generated during the production of various foods. It was revealed that animal products massively impact the environment while opting for a vegan diet can dramatically reduce this harm.

The findings showed that 74g of CO2 is produced to make cheese, and a similarly high 52g is required for chicken. The most staggering reveal was that of beef- a whopping 330 grams of carbon is emitted for a single serving. 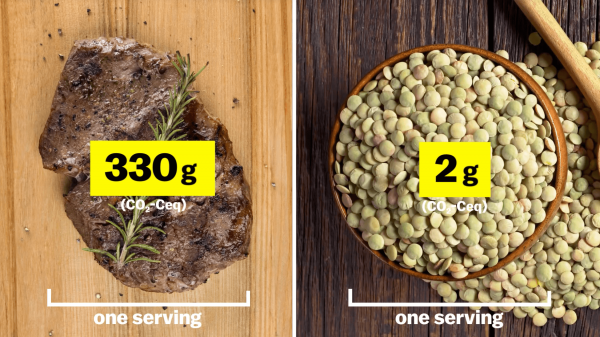 “That’s like driving a car three miles” by eating just one meal, explained researcher M. Sanjayan. Contrastingly, only 1.9g is emitted when producing beans and just 2 grams of carbon is expelled for lentil production.

On the matter, Sanjayan stated: “We’re probably eating too much meat… Vegan is the way to go for the least impact on the planet”.

“If we can just reduce our meat intake, every little bit helps. And if you can bring it down a lot, you can help the climate a lot,” added Almaraz. 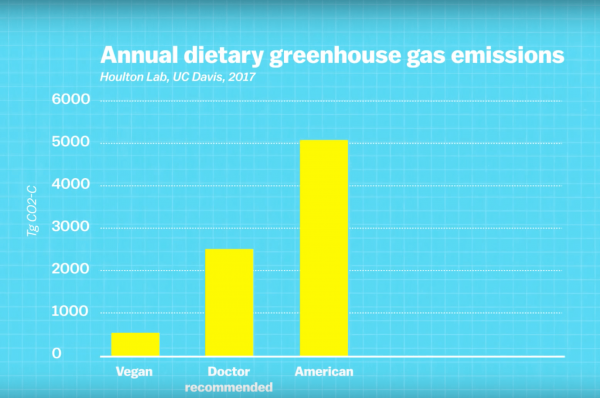 Climate change is just one symptom of meat production. The researchers also commented on the amount of food waste occurring from the industry, as many foods including corn, oats and grain are fed to livestock.

Almaraz explained that “You could feed 3.5 billion people with that grain”. Additionally, “If we were just directly eating these grains ourselves, it would eliminate a lot of the CO2 that is emitted from cattle production”.

The good news is, for those wanting to help the planet but not knowing where to start, the dining table may be the easiest and most effective way.

“A lot of people feel really helpless when it comes to climate change, like they can’t make a difference. And what our research is showing is that your personal decisions really can have a big impact”.