For advocates of veganism, often the most important thing to do is to spread the word. It’s all very well holding the information yourself about the exploitation of animals, the impact animal agriculture has on the environment and the health benefits of a plant-based diet, but unless you can get the attention of others it’s not going to change the world.

PETA, an animal welfare organisation who dedicate their time to spreading the word of veganism, have released an ad campaign this week featuring Bonnie-Jill Laflin, the first ever female scout for the NBA. As with many of PETA’s previous ads that have included aesthetically pleasing women, Laflin has been depicted naked, or almost naked (she has shoes on). The picture accompanies the slogan ‘Proud to Have Been NBA’s First Female Scout. Even Prouder to be Vegan.’ Although PETA should be commended for recognising Laflin’s greatest achievement rather than just calling her a model or TV personality, it throws into question once again whether naked women should be used to promote veganism. 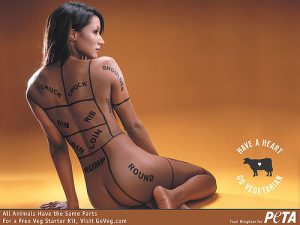 Unfortunately we live in a world where men assume that women’s nudity is for their consumption. In the UK men have page 3 of The Sun, a double page spread dedicated entirely to featuring pictures of women in their underwear for men’s entertainment. If a woman dares to walk down the street scantily clad, or even just looking nice, she is catcalled. Nights out are less and less about blowing off some steam with a drink and some dancing, but are a competition for how many girls men can ‘pick up’. It is a mating ritual where women are so often the losers. That is not to say that women can’t also enjoy the benefits of casual sex, but they should be able to do so safely, in a world where they are equal to the men they are talking to and not preyed on by them. In a world where they aren’t fearful of saying the word no. All this might sound a bit extreme when considering whether or not PETA should feature naked women in their ads, but it’s all interlinked.

This is by no means the first time that PETA have chosen to advertise in this way. PETA had an entire series of anti-fur adverts with the slogan ‘I’d rather go naked’, possibly the only selection of PETA’s ads that actually warranted female nudity. But they also have ads featuring facts about the health benefits of veganism, with a woman in a revealing nurse costume, an advert of a naked Stephanie Pratt holding a bunny with the slogan ‘Be Nice to Bunnies’ and several ads picturing almost naked women being treated in the same ways in which animals are treated on farms. 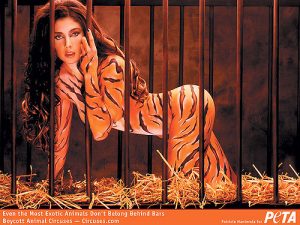 The reality is that the nudity of these women is not the problem, it’s the sexualisation of them. PETA is selling the women’s sexual appeal in order to convince people to go vegan, at best this is disrespectful, at worst it is hypocritical. Veganism is about compassion and it’s about equality. Adverts that are designed specifically to capture the audience’s attention by over sexualising a woman are born out of inequality between men and women and the idea that women exist for the pleasure and benefit of men. In addition to this many people believe that to be a feminist you need also to consider the women in the farming world who are exploited every single day; cows, sheep and pigs who are used for little more than milk or reproductive capabilities. It seems only logical, then, for vegans to participate actively in feminism.

In addition to the issues surrounding the unequal relationship between society’s men and women, PETA seems only to include the bodies of women who are smaller than the average woman in a western society. This only contributes to the incredibly damaging idea that women have to look a certain way in order to be considered attractive. This in turn feeds into the idea that a woman’s attractiveness in some way correlates with her worth as a human being. 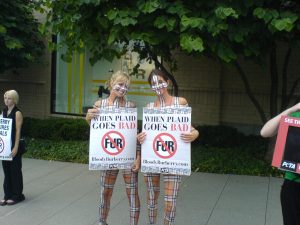 The only time that a plus sized woman has been depicted on any of PETA’s adverts, it was a cartoon and she was being compared to a whale. ‘Save the Whales’, the advert said ‘LOSE THE BLUBBER: GO VEGETARIAN‘. Not only is this damaging to women’s self esteem and overall mental health, but it also suggests that losing weight and becoming an ‘acceptable’ size should be one of the driving forces behind convincing people to ditch meat. Although veganism has a positive impact on people’s health, and this can sometimes lead to weight loss, the focus should be on physical well being and not image. After all not everyone who is healthy fits into a size 6 and some people need to gain weight in order to be healthy.

Using smaller models is not the only way in which PETA’s adverts have body shamed women, however. During another series of anti-fur ads, PETA suggested that women’s body hair was unpleasant and unattractive. This is not helpful in the battle against inequality between genders.

Although veganism is about the animals, it doesn’t mean we should ignore other world problems outside of animal welfare.