Pizza Express Hong Kong has become the first pizza chain in the world to create a vegan pizza made with Bay Area brand JUST’s mung bean based “Just Egg.”

While the Pizza Express locations in the UK now offer a number of vegan options, Hong Kong had been slow to follow suit despite the region’s growing interest in plant-based and vegan food. Like much of Asia, Hong Kong is still tied to its long history of meat-eating and seeing vegetarianism as only reserved for Buddhist austerity. But demand is shifting as younger consumers seek options better for their health and the planet.

Earlier this year, the Green Monday campaign worked with Pizza Express Hong Kong to expand its menu to feature vegan pizza options. The chain had several vegetarian options on its menus but nothing was fully vegan unless modified (such as a pizza served without cheese). The new vegan offerings have proven successful, leading the chain to experiment with and now feature the vegan egg.

In a video released on its Facebook page, Pizza Express Hong Kong revealed the new vegan pizza as well as a pasta dish, both made with the vegan egg.

The Just Egg made it’s international debut in Hong Kong earlier this year in an exclusive partnership with the Green Monday campaign, the region’s version of Meatless Monday, and its sister business, Green Common, a plant-based restaurant and health food market chain. The restaurants serve the egg in a variety of breakfast dishes as well as in the popular Japanese-style Teriyaki bowl.

The vegan egg looks, cooks, and tastes just like a chicken egg, but without any of the cholesterol. It’s a healthy plant-based source of protein that’s significantly more sustainable than chicken eggs, using less water and land to produce. The vegan egg has created quite a buzz since it launched in January. Most recently a launch in central Florida saw a line of consumers around the block waiting to try the product. 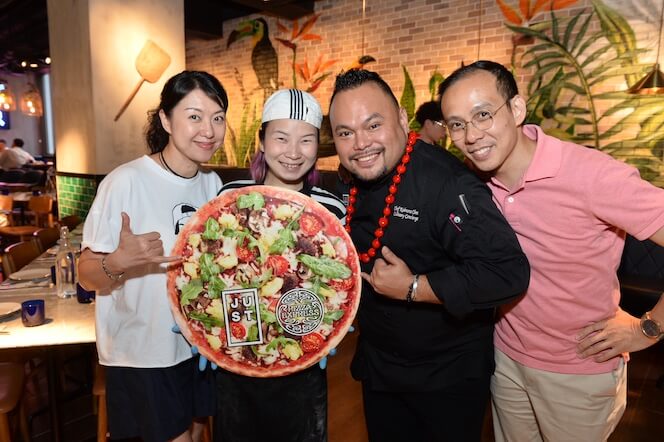 JUST (formerly Hampton Creek) developed the product through its unique database of plant properties. The company has identified potential uses in plants, nuts, seeds, and beans. The mung bean showed the potential to emulsify and scramble similar to a chicken egg. JUST now makes the liquid vegan egg and a pre-made patty that works just like an egg McMuffin patty. Most recently, the NFL’s Denver Broncos brought in the eggless egg patties as an item on the player menus.

The new dishes made with the vegan egg are currently only available at Pizza Express’s Lee Tung location.