International pizza chain, Pizza Express, is taking its vegan pies to the mass market. The company is launching its signature Vegan Giardiniera pizza in Waitrose supermarkets later this month.

The UK-based pizza chain has already commercialized many of its popular dine-in menu items, but this will be the brand’s first retail vegan launch. The Vegan Giardiniera is now a restaurant classic, as it was the first completely vegan option available at Pizza Express. The veggie-heavy pie is made with artichokes, asparagus, red onion, black olives, vegan mozzarella cheese, garlic oil, and vegan seasoning, all atop the restaurant’s classic passata red sauce and signature crust.

Since launching the Vegan Giardiniera in June of 2017, the brand has incorporated other vegan options for limited-time runs. The most recent summer menu included a spin on the classic: the Leggera Vegan Giardiniera, which featured seasonal summer produce. Pizza Express has also announced a new vegan pizza creation to celebrate World Vegan Day on November 1. Diners can look forward to the Vegan Puttanesca, which will be the company’s most inventive vegan pie yet. This pizza will be topped with a plant-based puttanesca sauce, olives, capers, garlic, herbs, tomatoes, and seasoned jackfruit. Unfortunately for the supermarket crowd, this offering is exclusive to restaurant customers – for now. 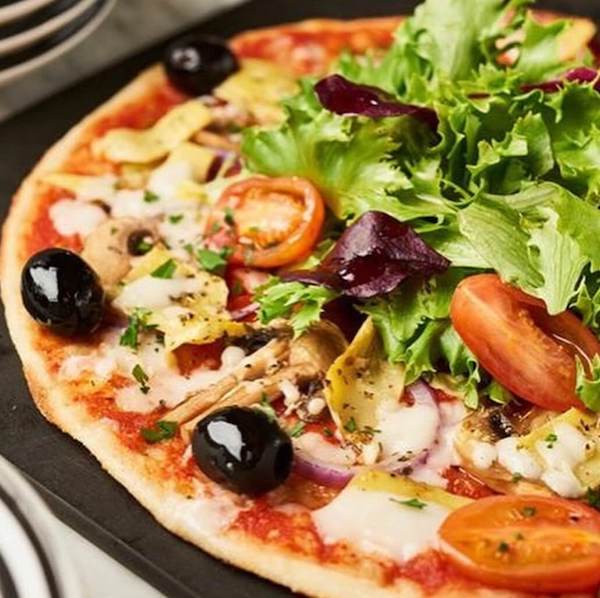 Those who live outside of the UK may also be able to sample the vegan options of Pizza Express; the chain has multiple locations in 12 other countries. Back in May, it became the first chain in Hong Kong to offer vegan pizzas, introducing not one but three plant-based options to the permanent menu, all made with Daiya cheese and additional toppings. Most recently, a Hong Kong location added the vegan JUST brand Just Egg to a signature pie.

Pizza is a universally loved food, and a growing number of chains and independent pizza shops around the world have begun to embrace the plant-based pie, creating well executed simple Neopolitan pizzas to loaded doughs drizzled with CBD-oil. Adventurous entrepreneurs have even created a vegan pizza business on a boat. Major chains including Domino’s in Australia and New Zealand have also begun offering vegan cheese.