According to the company website, the restaurant’s new plant-based options include the Puttanesca, a vegan pizza topped with pulled jackfruit and a tomato sauce of olives and capers. The new gluten-free and vegan Peporanata features penne tossed in a tangy tomato passata with mixed peppers. Vegan dessert is on the menu too, thanks to the Doletti Carrot Cake, which comes topped with dairy-free icing.

The brand also notes that its Leggera pizzas, a thin crust pizza featuring a hole in the centre with a salad, is now made using wholemeal flour. Customers can order any of the restaurant’s pizzas as Leggera. 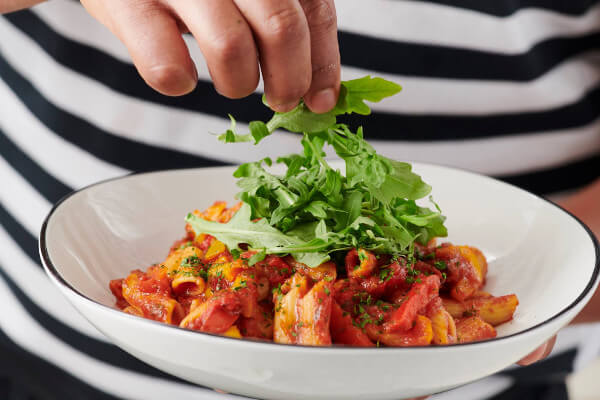 “Considering that almost a third of all evening meals eaten in the UK are now vegetarian or vegan and over a fifth (22%) of the population is actively choosing gluten-free foods, it’s no surprise to see this consumer behaviour driving restaurant meal choices,” Timothy Love, Senior Marketing Manager at Pizza Express said in a statement.

Pizza Express, which has over 470 restaurants across the UK and an additional 100 locations overseas, has been steadily working to increase its vegan options. Last May, it became the first pizza chain to offer plant-based pies in Hong Kong. Over the summer, Pizza Express Hong Kong launched a new vegan pizza topped with JUST Egg, a pourable plant-based egg made from mung beans developed by California-based food tech company JUST.

“With over 20 delicious toppings to choose from, plus the option of having a gluten-free base – we are proud to offer a wider variety of dishes suitable for every taste and lifestyle choice; ensuring that we are offering the best Pizza Express experience for all customers,” he continued.

Last June, a new vegan cheese pizza and a plant-based semifreddo dessert were featured on the summer menu of the fast-casual chain’s UK locations. Earlier this month, the brand announced that it would be entering the plant-based grocery market with the debut of a frozen Vegan Giardiniera pizza in Waitrose stores. The vegetable-loaded pie, which features vegan mozzarella with artichokes, asparagus, olives, red onion, garlic oil, and tomato passata, is expected to be in stores at the end of the month.