Plant-based products are on the rise across the globe, according to new data from leading food and beverage market research firm, Innova Market Insights. The report revealed that the number of products referencing “plant-based” ingredients on the label has risen by 62  percent between 2013 and 2017.

Nondairy milk led the way in terms of overall growth; the global nondairy milk market is expected to reach $16.3 billion USD this year, up from $9.8 billion last year. Innova notes that new plant-based milk products accounted for eight percent of overall dairy launches recorded in 2017. Further, while there is also growing availability in categories such as nondairy yogurt and ice cream, new vegan milk product launches have more than doubled across the globe over a five-year period.

“The dairy alternatives market has been a particular beneficiary of this trend,”  said Lu Ann Williams, Director of Innovation at Innova Market Insights. “With the growing availability and promotion of plant-based options to traditional dairy lines, specifically milk beverages, and cultured products such as yogurt, frozen desserts, and ice cream.” 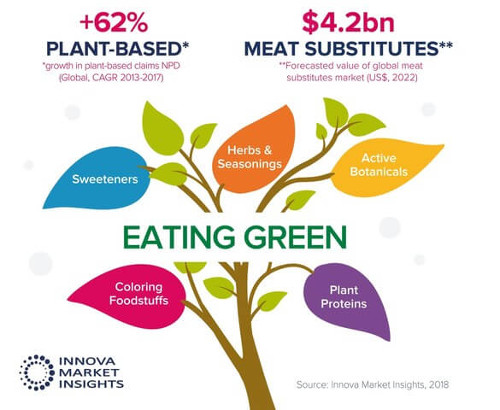 “In the move to offer something new, we are starting to see an increasing variety of non-soy plant-based ingredients, including cereals such as rice, oats, and barley,” Williams added. Brands, such as former dairy company Elmhurst and others, have also begun to branch out beyond almonds for nut-based milk varieties. “We also noticed an increase in nuts, such as almonds, hazelnuts, cashews, walnuts, and macadamias, as well as coconut and more unusual options such as lupin, hemp, and flaxseed.”

Vegan meats are also on the rise, where global sales are expected to reach $4.2 billion USD by 2022. Ingredients such as vegetables, grain, and soy are expected to be key ingredients leading the growth of the category. Recent data shows that wheat gluten, which is used to make the vegan meat seitan, is expected to grow in the coming years, particularly in the Asia Pacific region.

The report concludes that growing awareness of the health risks associated with meat and dairy, combined with concerns related to environmental sustainability and the ethics of using animals for food are playing a large role in the rapid growth of plant-based products across the globe.