New Barn, a US-based plant milk company, has raised $3.8 million to fund a major expansion into the plant-based product market.

The central California company currently produces five varieties of organic almond milk, including a barista-grade product, and eight flavors of Almond Creme, an organic nondairy ice cream. All of the beverages are vegan, but the ice creams contain egg. However, the company just released a vegan version of its most popular Almond Cremes in early March. The vegan varieties are not yet in stores, but this additional funding may help kickstart its distribution.

The funding was sourced from a special investment company, New Food SPV, which was set up by New Barn’s Chairman, Ted Robb. The company also received financial support from other individual entities excited about New Barn’s plant-based goals. 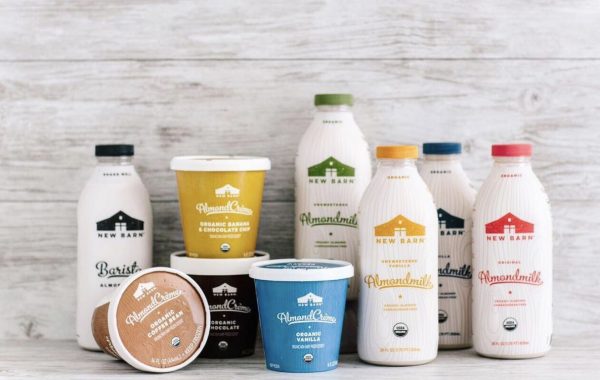 Robb commented, “We have experienced tremendous growth since we launched in 2015. Customers are falling in love with our brand and our steadfast commitment to making clean, delicious organic products.” He continued, “We are really excited about what is to come in 2018. We have a fantastic team, exciting ideas, and will be stepping out in a big way.”

New Barn is one of many frozen dessert companies transitioning into the vegan market. Vegan ice cream was once limited to a single bottom shelf in the frozen aisle of select health food stores, but now, grocers cannot find enough space to stock all of the plant-based options. Ben & Jerry’s led the way in early 2016 with their first four vegan pints, and many dairy-based ice cream companies have followed. Breyers, Jenni’s, Haggen Dazs, McConnell’s and Halo Top have all released vegan lines. Due to the success of these vegan products, many of these brands have already expanded on their initial launches with new vegan flavors. Ben and Jerry’s now offers nine vegan pints, and Halo Top offers fourteen vegan versions of its best-selling flavors.