Olimp, one of Poland’s largest casual restaurant chains, has added vegan options to its menu at all 76 locations. Inspired by the popular Meatless Monday campaign, the restaurant will now offer plant-based items every Monday.

The new vegan menu options are the result of a collaboration with RoślinnieJemy, a Polish campaign run by the country’s largest animal rights organization, Open Cages. RoślinnieJemy works to raise awareness of plant-based food among consumers, restaurants, lifestyle brands, and other businesses. RoślinnieJemy vegan food specialists worked alongside Olimp chefs to create the new menu.

According to the restaurant, the new items were developed to appeal to vegans, vegetarians, and omnivores alike with plant-centric options such as falafel with hummus, lentil dumplings, tabbouleh, stuffed sweet potatoes, and cauliflower steak. For traditional tastes, the restaurant has developed meatless shepherd’s pie as well as vegan burgers made from carrots and beets. 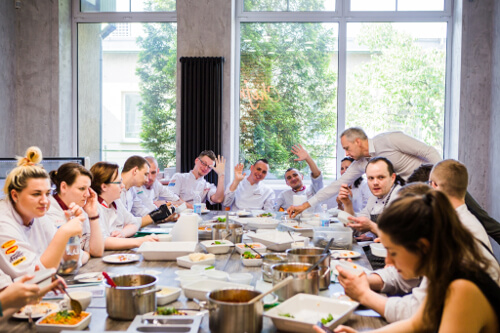 “We’ve decided to launch plant-based options in our menu and join Meatless Mondays movement as we believe, that veganism is not a temporary trend, but a lifestyle choice for many of our customers, said Piotr Niemiec, the owner of the Olimp restaurant chain.“Seeing how engaged our cooks were during the workshops held by RoslinnieJemy makes me sure that it was a right choice to launch more plant-based options.”

According to research conducted by Roślinniejemy, 57.8 percent of Poles are cutting back on meat consumption in favor of vegan-friendly protein sources. In a 2017 study, London-based market research firm Mintel found that 11 percent of Polish people ages 16-24 identify as vegetarian while 10 percent identify as vegan. Roślinniejemy also highlights Jadłonomia, a Polish vegan blogger who now hosts her own television program, as playing a role in making veganism more popular across the country. Roślinniejemy hopes that Olimp’s move will inspire other restaurants to follow suit.

Olimp is a restaurant chain and franchise with 76 restaurants across Poland that offers customers a self-service system that sells meals by weight. It is the largest and fastest-growing restaurant service concept in Poland. According to the brand, the Meatless Monday promotion will go until September 30. The restaurant has not provided further details on whether the vegan options will become permanent placements on the menu.