So we did it – we bit the bullet (maybe a more peaceful metaphor would be appropriate) and became the vegan activists we never knew we could be.

Vegan activism has a reputation for being extreme – people have been branded like cattle; protested naked, chained up and covered in fake blood. Unsurprisingly therefore, we have always been wary of protesting at events – if we get called ‘preachy’ simply for being vegan, what would the response be when we remonstrated?

Then we heard that our university’s vegan society planned to peacefully protest a student ball being held at Bristol Zoo (UK). 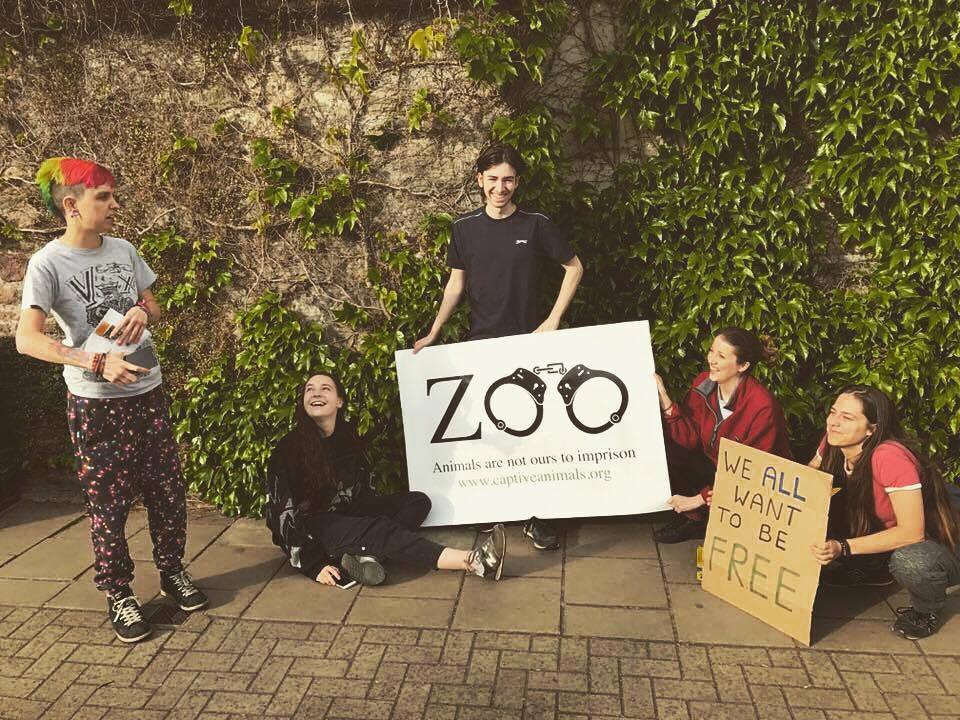 If you’re wondering why zoos might qualify as protest-worthy (as indeed we were at first), here’s the society’s statement to explain:

“We fundamentally disagree with the use of animals for entertainment in any setting…. Zoos by their very nature cause unnecessary distress to animals who should be wild, by confining them in unnatural environments and displaying them as a spectacle to paying customers.

Animals at Bristol Zoo are confined in inappropriately small cages, and have recently been filmed displaying signs of mental distress. Footage of animals including lions and otters is currently under investigation from the Captive Animals’ Protection Society (CAPS) due to the behaviour they have displayed. The integrity of Bristol Zoo has fallen further into disrepute with the scandalous appearance of vehicles belonging to East Africa Safaris, a pay-to-hunt tourism company, outside their establishment this week.

It is highly inappropriate for loud, intoxicated people to be around wild animals, who have no choice over participation in the event or means of avoiding them. Similar events at Bristol and other zoos have been condemned by animal charities for further jeopardising the welfare of the animals, who would usually be resting during the evenings.”We couldn’t really argue with this, so we went.

For those of you wondering what it’s like – and maybe whether you should protest too – here are our insights into a small-scale peaceful vegan protest.

It can be intimidating and awkward protesting something your friends are doing. We saw a few people we knew – it could have been difficult, so we just smiled, were friendly and made it clear we weren’t there to make them uncomfortable. As far as we know, no friendships have been damaged by our appearance at their ball.

People easily feel personally targeted, and become defensive. We had our best conversations with people when we smiled, and tried our best to show that we were there to educate, not ‘hate’.

People can come up with truly awful arguments. One girl called us hypocrites for protesting the noise disruption affecting the zoo animals because we ‘probably play music in the park where birds are around’… We did point out that the birds are free to fly away, but somehow she failed to understand the difference. Prepare your mind to deal with such baffling ‘defences’.

Leaflets are a must have – if people won’t take the time to listen, they’ll probably be willing to grab a leaflet from you. And, if you have leaflets left over, you can give them to your peers or family, or stick them around public areas, to try and spread the word in other walks of your life.

It might not be for you. BUT! You should try it. Add it to the vegan bucket list, make some banners and protest. It can be a daunting idea, but we left feeling rewarded, and hopeful. Getting the word out about compassionate living is important, and if you can handle being ignored, looked at strangely and argued with, a protest is a great way to do it. 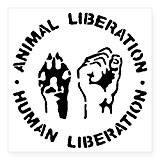 What became very apparent was not hostility towards us, but an awkwardness, discomfort with acknowledging what we were saying. And we get that – we haven’t always been vegan, and have been to zoos plenty of times. That’s why education is key. The disconnect, and willingness to continue with the disconnect, stood out above else all.

So we thought we would write this article, to encourage more of you to protest, in the hope that eventually the disconnect will be thing of the past.