UK-based vegan and veggie meat brand Quorn Foods has announced it will be taking steps to remove black plastic containers from its products. The company sells meat-free nuggets, sausages, burgers, and more across the world. Now it says it aims to achieve 100 percent recyclable, reusable, and sustainable packaging by 2025.

By the end of June more than 297 tonnes of non-recyclable waste in the form of black plastic containers will be phased out of the Quorn supply chain. With the containers removed altogether by the end of the year. The process began in April after the brand learned from the Waste and Resources Action Programme (WRAP) that black plastic was being sent to landfills. White and opaque recyclable plastics will replace the black containers previously used for products such as Quorn Mince and Pieces.

“As a founding signatory of WRAP’s UK Plastic Pact, we are very excited to announce this positive change towards increased sustainability of our products,” said Quorn Foods’ CEO Kevin Brennan in a statement. “Moving so quickly to remove black plastic is a significant challenge, but one that, as a sustainable company, we view as being of the utmost importance. We view this as the right thing to do, despite the six-figure cost.” 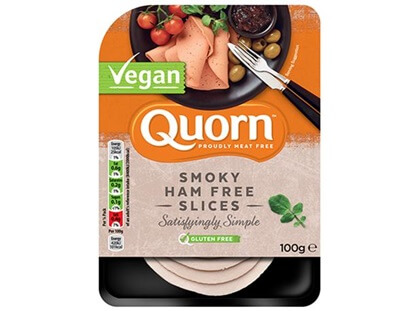 He continued, “our customers will be able to continue enjoying Quorn as part of a balanced and healthy diet, knowing that we are committed to reducing all forms of food waste in our supply chain and to promoting and advancing sustainability without passing the cost onto the customer.”

Quorn is not the first major company to commit to phasing out non-recyclable materials; furniture giant IKEA has also pledged to make its supply chain more sustainable. The international chain will phase out all single-use plastic by 2020. Further, coffee chain Pret A Manger plans to switch to 100 percent recyclable, reusable, or compostable materials by 2025, as well as assisting customers to recycle in its restaurants.

Even major financial companies are getting on board with the push for sustainability. American Express is set to launch the first-ever credit card made with ocean plastic in the next 12 months. It also aims to lose single-use plastic from its offices and pursue zero-waste certification.