In an interview with VegNews, Principe revealed that since going vegan, his sinus issues have decreased. “Also, I have more energy in general.” He continued, “More energy means more physical activity, leading to more endurance. If you treat your body right, it will work the way you need it to work.”

A vegetarian of over 20 years, Principe made the decision to go vegan late last year. “I felt like it was time to make the full commitment,” Principe told Altpress. “I’ve been toying with the idea for a long time and, really, it was just our rigorous touring schedule that prevented me from fully committing to it. Then I realized it was kind of a bullshit excuse, especially in 2017 where it’s a lot easier to be vegan globally than it was 10 years ago.” The Illinois native also cited his wife, a vegan of 20 years, as inspiration for his decision to cut all animal products out of his diet. 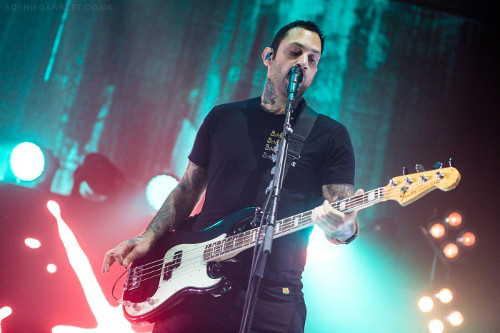 Although Principe is a new vegan, he and his fellow members of Rise Against have involved PETA in their activism for a number of years. The band first established a relationship with the animal rights organization during the Warped Tour in 2003 and has since welcomed them back among the merchandise stands, where they provide information on how to combat animal cruelty. “The goal is not to force-feed anything to anybody, but to present the facts and they do a great job at that,” Principe told Altpress. “Us and PETA are a great match.”

Many health experts and organizations, including Dr. Michael Greger and the Physician’s Committee for Responsible Medicine, believe that a whole food and plant-based diet is one of the healthiest ways to eat. Additionally, both the American Diabetic Association and the National Health Service support the evidence of the plant-based diet’s potential to mitigate the onset and effects of type-2 diabetes.

Principe is not the only celebrity who has seen improvements to his health since going vegan. Will.i.am of The Black Eyed Peas went vegan last year and has not only lost weight, but also told the cast of British talk show “Loose Women” that, “My blood pressure and cholesterol came down without having to take medicine, my nasal drip has gone, both my nostrils are working – as I always had one nostril that didn’t work, No more nasal drip no more acid reflux.”