Posting on her Instagram story, the Pitch Perfect 3 star, who turned vegan after eating shark fin soup, shared a screenshot from CNN with three headlines visible. The first headline notes the beef recall, the second reports on a ham recall, noting a “deadly” listeria outbreak, and the third reports on an egg recall, also due to salmonella contamination.

The words “beef,” “ready-to-eat ham,” and “recalled eggs” were circled on the post, and over the top of the screenshot Rose wrote, “Good time to go vegan folks.” This is not the first time the actress has encouraged her followers to go vegan; earlier this year she showed off her plant-based staples, again, in an Instagram story, and hosted a vegan BBQ with her Pitch Perfect 3 colleagues, which was also posted on social media. 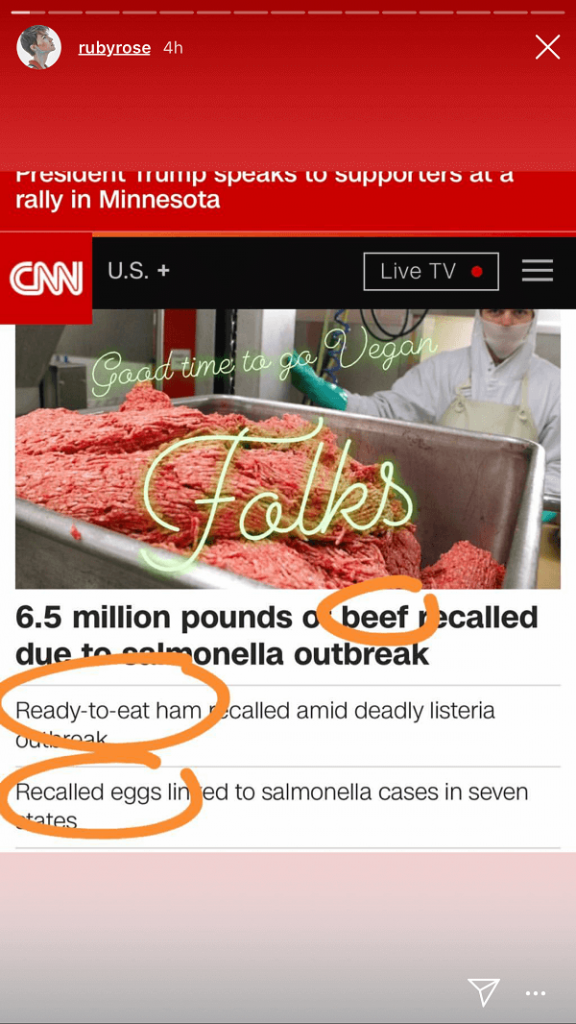 The stories Rose highlighted on Instagram are not unique; animal products have been recalled before due to potentially harmful contaminants. Last year in the UK, 700,000 eggs were recalled due to chemical contamination. According to CNN, between August 5 and September 6 there were 57 cases of salmonella linked to JBS’ beef in 16 states. No deaths were reported, however, 14 people were hospitalized with the condition.

As Rose hints, going vegan can help to reduce the risk of food poisoning. According to a study published in June, by following a meat-free or vegan diet, consumers are significantly less likely to become ill due to foodborne illness. The study evaluated 100 kitchen towels and discovered that coliform and s.aureus (types of harmful bacteria) were more likely to appear on the towels of meat-eating families.

The study’s lead author, Susheela D.Biranjia-Hurdoyal, said at the time, “The data indicated that unhygienic practices while handling non-vegetarian food could be common in the kitchen. Our study demonstrates that the family composition and hygienic practices in the kitchen affected the microbial load of kitchen towels.” She added, “We also found that diet, type of use and moist towels could be very important in promoting the growth of potential pathogens responsible for food poisoning.”