For fans of popular series, Orange is the New Black and many in the vegan community – the knowledge of Ruby Rose’s vegan status may not be new information, yet a recent Tweet might be.

Rose has spoken to her 1.3 million-strong Twitter followers, saying she will launch a vegan leather handbag with her face on it.

The Australian actress, who plays Stella Carlin in OITNB made her claim after high-end fashion brand Prada released a handbag with a face printed on it, that bears in canny resemblance to her own. The Prada bag is made from genuine (animal) leather.

According to VN, the photographer who took the original photo, which is believed to be the one on Prada’s handbag – altered Rose to the handbag’s release.

In a sarcastic, yet light-hearted tweet, Rose said “[I] kinda like this Prada bag that apparently is in no way any likeness to me at all even though … everyone keeps asking about it” – with an accompanying picture that blended the Prada handbag and her photo – perfectly. 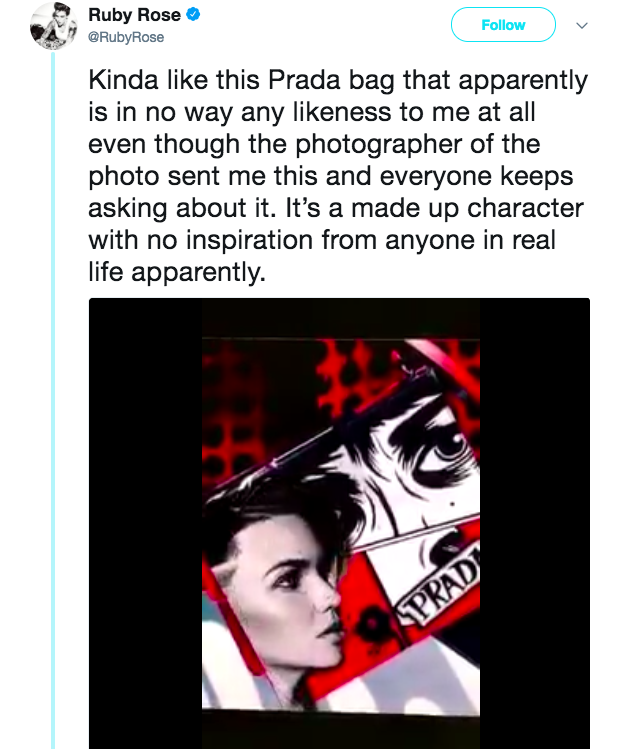 Rose, whose latest film: Pitch Perfect 3, is set to debut in the US on December 22nd isn’t letting her face printed on animal skin get her down. The Hollywood star later tweeted, “No big deal. I’ll make one, it will look the same because I’ll use the same photo of my face but in vegan leather. A copy of a copy.”

This isn’t the first time Ruby Rose has used her big following and platform to discuss veganism. In April this year, Rose again used her Twitter voice to urge others to join the vegan movement, specifically in an effort to challenge Trump’s denial of climate change.

Ruby Rose’s own line of vegan leather handbags are unlikely to be ready for this year’s Christmas wish list, but you may want to keep an eye out for a possible 2018 debut…