Just in time for warmer weather, UK-based supermarket chain Sainsbury’s has launched its own range of vegan ice cream in three flavors.

The new line, called Deliciously Free From, is made from a coconut oil base and comes in three flavors: Strawberry, Chocolate, and Vanilla.

This is not the first time Sainsbury’s has responded to the growing demand for vegan items by releasing new products under the store label. Last year, the company expanded its offering of vegan cheese, including a vegan cheeseboard platter for the holidays. Similarly,  supermarket chain Tesco has been steadily rolling out its own line of vegan products due to demand. Tesco’s most recent additions include heat-and-serve chicken-style pieces and a range of readymade and on-the-go meals developed by vegan chef Derek Sarno of Wicked Healthy. That line is now available at 600 stores across the country. 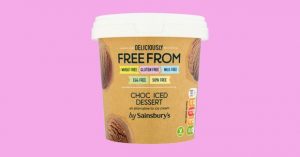 As interest in vegan food continues to grow, more brands are catching on and releasing their own vegan products. Vegan dessert, in particular, was predicted to be one of the top food trends of 2018. While the dairy industry continues to fall, sales of dairy-free milk and ice cream are quickly rising. According to a report from last year, the global vegan ice cream market was destined to reach $1 billion by the end of the year, encompassing a total of 194.5 thousand tonnes of plant-based ice cream.

Each of Sainsbury’s “iced desserts” is vegan and free from wheat, gluten, and soy and are they are priced at £3.50 per 500-milliliter tub.