Vegan salmon made from algae is now available in GreenBay, London’s first plant-based supermarket. The fish-free fish is made by French brand Odontella.

Called the “Veggie Marine Salmon,” the product is said to have a tender and soft texture that cooks and tastes like the real thing. Like traditional salmon, it’s also rich in omega-3 fatty acid. “We first released the product a while ago but the demand was so HUGE that the product sold out in just a few hours before we could even announce it,” GreenBay announced on Facebook.

According to the brand, which was founded by marine biologists and nutrition experts, its vegan salmon is made from microalgae and is rich in protein. It’s also free from pesticides and heavy metals, a known contaminant in fish and shellfish. 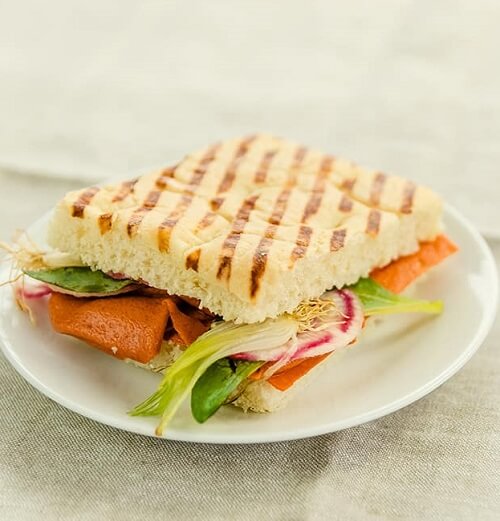 Can Plant-Based Seafood Save the Ocean?

The company hopes to make a positive impact on the environment through plant-based seafood. According to the Worldwatch Institute’s State of the World 2015 report, overfishing is connected to climate change.

“As our negative impact on the oceans has grown, so has our understanding of the myriad ways in which the health of the marine environment determines our own,” wrote study contributor Katie Auth. “The combined stresses of human activities like overfishing and climate change now pose distinct and intensified threats to marine systems.”

Seafood is the world’s most popular source of protein. In recent years, emerging brands such as Odontella, UK-based F-Ish, and Good Catch Foods are aiming to meet the demand with sustainable, plant-based alternatives.

Founded by chefs Chad and Derek Sarno – the creator of Tesco’s Wicked Kitchen range of plant-based meals -, Good Catch Foods makes realistic vegan tuna from a proprietary blend of beans and legumes. Like Odontella’s Veggie Marine Salmon, it is high in protein and rich in omega-3 fatty acid to offer consumers the same nutritional benefits as fish.

California-based vegan seafood brand Sophie’s Kitchen, which also makes plant-based tuna, was recently announced as part of the Chipotle Aluminaries Project, launched by the eponymous fast-casual chain. The company will receive coaching from industry experts in order to help grow the brand.