Reported by Fast Company, Terramino Foods was co-founded by Kimberlie Le and Joshua Nixon, who met as students at the University of California-Berkeley (UC Berkeley). There, they attended an undergraduate class called Plant-Based Seafood Collider and worked with experts in food chemistry to understand how to make plant-based ingredients look, cook, and taste like fish. Soon, the pair will graduate from IndioBio, a four-month program that provides $250,000 in seed funding, workspace, and mentoring to biotech startups.

“We were looking at a lot of the efficiencies of the production of what in some cases are food products that then get ground up and put into fish fingers or fish cakes or fish paste,” said Allison Berke, an academic research advisor for the non-profit organization the Good Food Institute and mentor to students during the class and other classes focused on developing plant-based meat. “There’s a wide range of different places where a fish could be replaced without losing the taste of the product.”

In contrast to other students, who chose to work with plant-based proteins, Le and Nixon chose to work with fungi, experimenting with various types before settling on koji. Koji, or Aspergillus oryzae, is an important ingredient to Japanese cuisine and culture. Created by inoculating rice or soybeans with a fermentation culture, koji is used in the production of sake, mirin, soy sauce, miso, rice vinegar, pickled vegetables, and other staple foods. “Instead of using [koji’s] ability to transform soy or rice, we’re using their biomass as a great source of protein,” said Le. 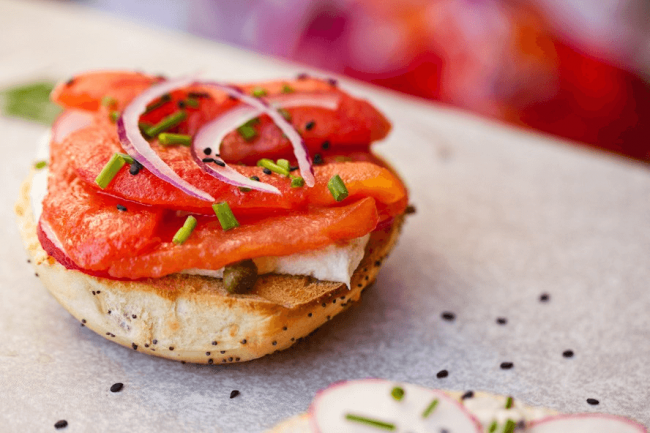 Along with koji, the vegan salmon burger is made with algae, which provides a familiar fishy flavor and omega-3 fatty acids. It contains less fat than real salmon and like meat, it is a complete protein. “Side by side with a salmon burger from Whole Foods, the fungi-based burger is nearly indistinguishable,” said Adele Peters from Fast Company.

Terramino Foods estimates that it will be able to supply restaurants with its plant-based salmon by the end of the year, with a burger and a fillet being the first products to hit the market. It hopes to expand into other plant-based seafood and meat alternatives using koji. By 2019, the company estimates that the price of its vegan salmon with be comparable with the market price for wholesale salmon.

“Right now, we’re not that far off from it, even at a very small scale,” Le said. “That kind of speaks to how our technology is not a matter of 5 or 10 years from now–it’s happening now. We can already feed people and it’s decently cost-effective. Our goal at scale, in a few years, will be to get the price down below any source of animal source protein, whether that be chicken or fish. We want to be price-competitive on all of these options.”

Terramino Foods is not alone in its quest to provide consumers with a new type of sustainable seafood. Clean meat company Wild Type recently raised $3.5 in funding to create lab-grown salmon. Ocean Hugger Foods developed “Ahimi Tuna,” a vegan tuna made from tomatoes that mimics the taste and texture of raw tuna used in sushi and poke. Recently, vegan seafood company Good Catch Foods received a sizable chunk of funding in order to disrupt the seafood industry. New Wave Foods, a graduate of IndieBio, has already begun distribution of its ethical plant-based shrimp to select locations.