After becoming one of the first cities in the U.S. to offer vegetarian and vegan meals for all students – from kindergarten to high school – Santa Barbara Unified School District (SBUSD) reports that this initiative has been a success.

The plant-based meals have been on offer daily following the district’s partnership with a local vegan meat company, Hungry Planet. These meals have been so successful, the options are likely to remain on the menu for students in years to follow.

When Director of Food Services, Nancy Weiss, started at SBUSD in 2008, she overhauled the cafeteria operations, ditching frozen boxed foods in favor of healthier, locally-prepared meals. Weiss wanted to accelerate healthy eating for the good of the planet, the wellbeing of the students, and the welfare of animals.

Last year for the district’s Earth Day celebration, Weiss joined forces with locally-owned vegan meat producers, Hungry Planet, to serve up vegetarian and vegan-friendly meals in honor of the environmental holiday. The overwhelmingly positive reaction by both students and parents led to the longstanding partnership between the district and the company. 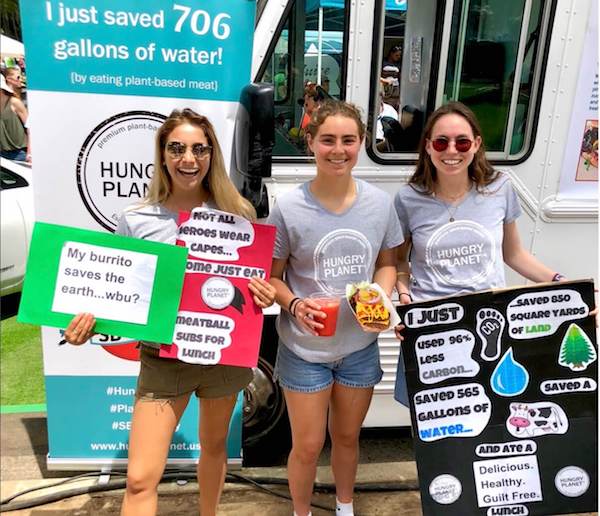 “Hungry Planet is a great bridge between the meat eater and the non-meat eater,”  Weiss told local news outlet,  KEYT. “It’s so much good on the plate.”

Most students echo Weiss’ sentiment for the non-GMO, plant-based meats. “I think it’s nice because it actually kinda tastes like real meat. It’s good,” said sixth grader, Gilbert Herrera. “I’d like to thank the school district and chefs for giving us the choice of real meat and alternative meats.”

Santa Barbara has 11 kitchens which produce the breakfast, lunch, and some dinner meals for its 28 schools. In total, the district serves an estimated two million meals to students per year. Half of these meals are vegan.

What’s more, there is variety among these options. “You can veritably do anything you want with this product,” Weiss said. She continued, “[It’s a] whole new way of looking at food.”

Due to the success of Hungry Planet meats at SBUSD, the company has expanded into 30 restaurants across the area. It can also be found at The Montecito Village Grocer.

Vegan options are quickly becoming more prevalent in schools. In late April, a press release announced a campaign by Meatless Monday is heading to 95 northeast U.S. school districts, while primary schools in Edinburgh, Scotland, are offering a similar meat-free program. In New Zealand, a preschool recently won a UNESCO award for its vegan menu and edible school garden. The UK government is also looking to add more vegan meals to its public schools.