California is striving for a cleaner and greener future, the San Francisco Examiner reports. With ambitions to cut their carbon footprint, Oakland Unified School District made an inspired change toward plant based menus at schools. In turn, the schools’ carbon footprint was cut by 14% in two years. Additionally, water loss saw a 6% improvement and $42,000 was saved.

The change was made after a study revealed the staggering difference in carbon emissions for plant based food compared to meals containing meat. Research showed that the carbon footprint of animal products was 76%, compared to just 7% for fruit and for vegetables, while legumes were at just 2%. As well as carbon emissions, it takes 15,000 litres of water and 25 kilograms of grain to produce one kilogram of beef. 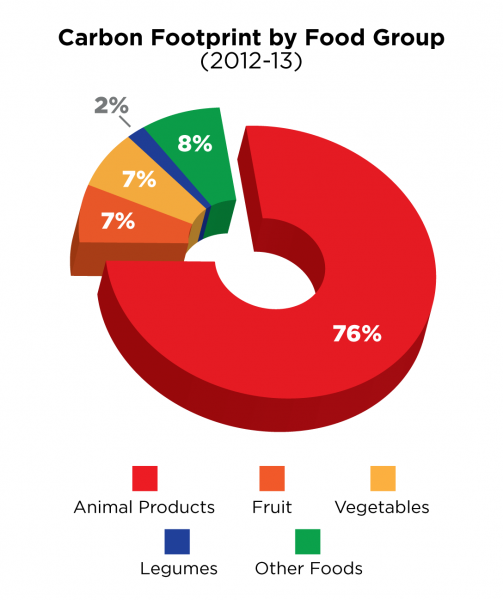 The San Francisco Examiner highlights that if every school in the state mirrored this movement, California’s carbon footprint would drop by 80 million kilograms in CO2 emissions. This is an exciting figure since San Francisco’s Board of Education recently approved a movement to make schools carbon-neutral by 2040.

While these goals are important and well-intended, a belief exists that “sustainable meat from organic, grass-fed dairy cows” is the answer to the environmental cost of meat consumption.

Unfortunately, this misconception is a detrimental one. Every year, a cow releases between 70 and 120 kilograms of methane. Roughly 1.4 billion cows are on the planet at one time. And since grass-fed cattle (which are perceived as the sustainable option) live several years longer than other cows, they require more resources and thus are more damaging to the environment. In fact, a grass-fed cow is said to use 30% more land and 35% more water than a conventionally grain-fed cow.

Nonetheless, the rise in schools leaning toward plant based eating is promising.