Cancer researchers and chefs have teamed up in Italy to create a healthy vegan pizza — so healthy, they say, that it may prevent cancer and heart disease. The Naples-based team is calling this “Pizza Pascalina” an “anti-tumor” pizza and “the pizza that extends life.”

The pizza is based on the health-promoting ingredients associated with the Mediterranean diet, including tomatoes, olives, nuts, rapini, garlic, and extra virgin olive oil. The cheeseless, meatless pie is devoid of all animal products, from the simple wheat-based crust to the Mediterranean vegetable toppings. Much of the cancer-preventing agents lie in the tomatoes, which must come from Corbara or San Marzano. Based on the research, the scientists believe that these tomatoes can inhibit certain digestive cancers. They also found that meals low in fat and high in fresh produce can reduce the risk of obesity and heart disease. 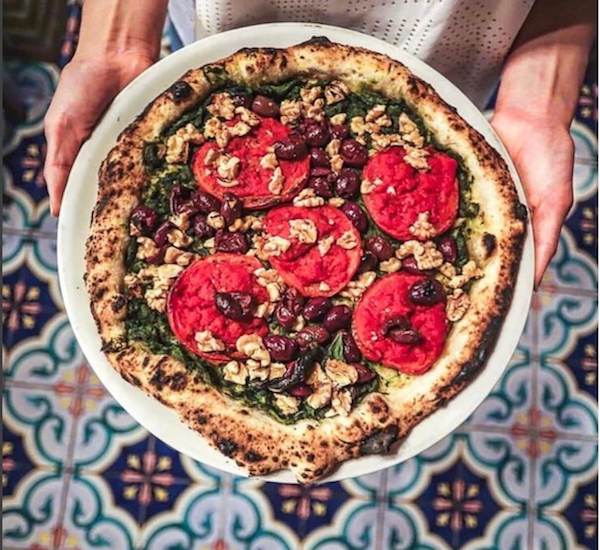 A collaboration between researchers and chefs, the goals of the pizza was to promote health amongst locals and there was no question that pizza was the perfect vessel to deliver this message. As opposed to juices and salads, which often come with less-than-appetizing stereotypes, the pizza is relatable and familiar to almost everyone. The Pizza Pascalina team was on a mission to prove to people that even pizza can be healthy, when topped with the right ingredients, and when harmful ingredients, like animal products, are left out.

According to scientists from the Istituto Nationale Tumori (National Cancer Institute), this pizza is “healthy enough” to be consumed as a stand-alone meal twice a week.

The pizza was first served at the Don Peppe booth at the Napoli Pizza Village, a local pizza festival featuring over 50 pizzerias. It can now be found in several pizzerias across Italy, as well as one location in New York City, Keste Wall Street.

Pizza has earned a poor reputation as being unhealthy and fattening due to its industrialization and animal-heavy ingredients, but take away the dairy cheese and the pepperoni, and it’s essentially vegetables and flour. Pizzerias making their own vegan pies are revolutionizing the idea of pizza; customers can now enjoy a slice (or three) without feeling guilty or sluggish afterward. Perhaps it’s time for the old adage to change: can a pizza a day keep the doctor away?