International vegan activism campaign “Be Fair Be Vegan” has landed in Seattle, Washington. The campaign’s pro-animal rights ads will be displayed throughout the city, local online newspaper Seattle Post-Intelligencer reports.

As the King’s County Metro’s advertising policy bans the depiction of violence against animals, the “Be Fair Be Vegan” ad campaign does not rely on graphic photos of animals victimized by humans.

The campaign aims to encourage people to rethink their relationship with animals using simple black-and-white photos. The photos show animals traditionally subjected to cruelty in a wide variety of exploitative industries such as factory farming, horse racing, fishing, animal testing, wool, and silk. In previous campaigns, billboards have also depicted humans and animals together, in order to show how, even though humans and animals are different, both are deserving of the right to be treated kindly and fairly.

“During the month of August, BeFairBeVegan ads are set to run on multiple Seattle city buses, billboards, as well as all over the Capitol Hill transit station,” the campaign wrote in a Facebook update. “Shown here, is a detail from the Capitol Hill station, which features 41 BFBV posters advocating animal equality and challenging viewers to see fellow animals for WHO they really are — individuals with minds and lives of their own — not WHAT our speciesist society is forcing them to become — objects to use and discard.” 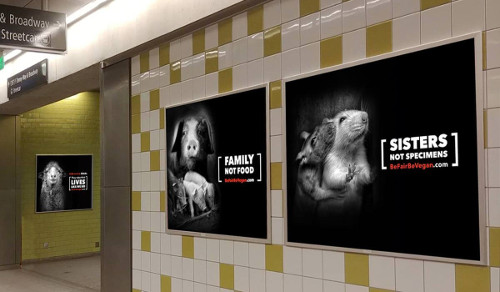 According to the campaign website, “The faces looking out from these billboards dare us to acknowledge what we usually choose to ignore: the inner lives of the animals we subjugate through our consumer choices, despite the immeasurable anguish we cause, and despite the increasing evidence that doing so is unnecessary.”

Since launching in NYC’s Times Square in 2016, the Be Fair Be Vegan campaign has been displayed in Melbourne, Tasmania’s most populous city, Hobart, Cleveland, Ohio, throughout Connecticut, and in Saint John’s, Newfoundland. According to the website, it will launch soon in Montreal. The campaign organizers credit generous sponsors, groups, and individual donors for helping to make its efforts possible.

Image Credit: Be Fair Be Vegan