True to its name, which literally translates to Potatoes Hot Potatoes, the new menu celebrates the humble and often overlooked baked potato. The concept is simple: customers choose a base, a sauce, and toppings. One can order a classic russet or sweet potato and smother it in a variety of plant-based gourmet sauces, from Red Chili with Chipotle Black Beans to Queso and New Mexican Green Chili with Green Lentils and Spinach. These sauces are substantial, chili-like foods that could stand as a meal on their own. Toppings include Miyoko’s vegan butter, smokey sweet coconut chips, scallions, cilantro, secret sauce, housemade pickles, and more. For the starch-adverse, there’s also crisp red cabbage slaw for a base, and banana horchata “milkshakes” round out the menu for a healthy end to the meal. 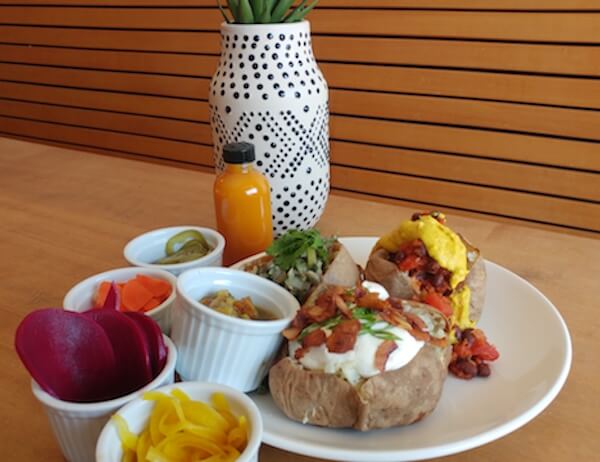 Chef Blanco adopted a plant-based diet last year as a means to heal himself of autoimmune disease-type symptoms. Within two weeks, he claimed that his major symptoms had disappeared, and he had regained his energy. On the restaurant’s website, Blanco wrote that he “felt better than he had in years.” His co-founder, Patrick, is not vegan, but he considers himself a “sommelier of spuds.” The restaurant idea is the conglomeration of Patrick’s affinity for potatoes and Blanco’s passion and talent for plant-based cuisine.

The pair announced the sudden transition in a post on Facebook earlier this September. They wrote, “Thank you to our loyal friends and fans of Stock. During the off-season, we have been busy in the lab creating a new menu so good that it’s getting a new restaurant aptly named Papas Hot Potatoes. We will be at the same location Stock was and have some of the key elements we all came to love like quality locally sourced food that also taste amazing. We are also changing things. We are adding a few concepts like easier takeaway, banana milkshakes, and a more plant-based menu. We are excited!”